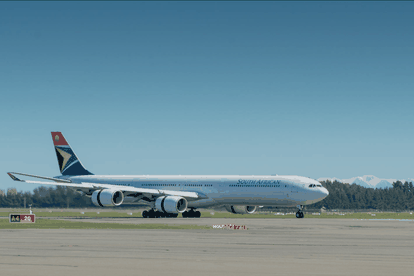 Hundreds of people have made their way back to New Zealand after many months in South Africa. Image via Christchurch Airport / Facebook

Hundreds of people have made their way back to New Zealand after many months in South Africa. Image via Christchurch Airport / Facebook

Lockdown, coupled with border closures in both countries, caused high levels of distress for South Africans and New Zealanders who needed to travel to the “Land of the Long White Cloud”. The lack of an affordable direct repatriation flight was also a major contributing factor.

Migrant South African families were separated for months due to being unable to travel to New Zealand. This caused huge financial and emotional distress for most families that had been torn apart for many months. The planned repatriation flight finally received approval and departed from Johannesburg on Monday.

A first for South African Airways

South African Airways, which is currently not operating any scheduled commercial flights, used an Airbus A 340-600 aircraft to fly from Johannesburg, across the Southern Indian Ocean to Christchurch in New Zealand.

Christchurch airport tweeted about the arrival of an unfamiliar aircraft.

All New Zealand citizens, as well as temporary and permanent residents arriving in New Zealand have to complete a mandatory 14-day quarantine when entering or returning to the country.

The two-week quarantine will be completed at facilities which are government managed. This is in order to reduce risks of increasing the infection rates in New Zealand, where the virus is under control after a resurgence only a few weeks ago.

New Zealand’s Health Director-General Ashely Bloomfield said, “These facilities are expressly set up to help minimise any risk of further infection in the community.”

Reuniting families after months of separation

The South African Airways flight was an answer to a prayer, for hundreds of New Zealand-bound passengers who had been stranded in South Africa for months.

The financial and emotional strain suffered while families in both countries waited for this repatriation flight to be organised, was immense.

In two weeks’ time, there will be much happiness and joy when the repatriated South Africans can join their spouses and families in their adopted land. The South African Airways A340-600 will be departing from Christchurch on Thursday 10 September.