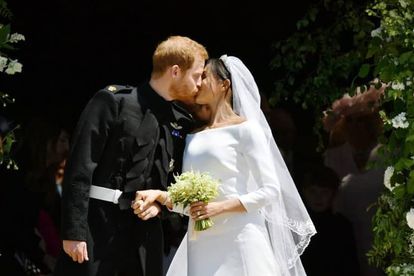 Britain’s Prince Harry, Duke of Sussex kisses his wife Meghan, Duchess of Sussex as they leave from the West Door of St George’s Chapel, Windsor Castle, in Windsor, on May 19, 2018 after their wedding ceremony. / AFP PHOTO / POOL / Ben Birchall

Britain’s Prince Harry, Duke of Sussex kisses his wife Meghan, Duchess of Sussex as they leave from the West Door of St George’s Chapel, Windsor Castle, in Windsor, on May 19, 2018 after their wedding ceremony. / AFP PHOTO / POOL / Ben Birchall

The Duke and Duchess of Sussex are set to open the Nelson Mandela Centenary Exhibition in London next week, as part of the #Madiba100 celebrations.

BizNews report the newlywed couple will be the guests of honour, as they launch the commemorative tributes of Mandela’s life through six main themes: Character, comrade, leader, prisoner, negotiator and statesman.

Nelson Mandela and the royal family

It’s quite befitting that Harry and Meghan will be there as ambassadors for Madiba. The monarchy has a brilliant history of supporting Mandela, both before and after his incarceration at the hands of the apartheid regime.

He had previously met with the Queen in 1995 – during her visit to South Africa – and then again in 2003, when Nelson was invited over to the UK.

Where is Nelson Mandela Centenary Exhibition?

By the banks of the River Thames, you’ll find the Waterloo-based Southbank Centre. The venue’s iconic Queen Elizabeth Hall will host the showpiece.

When does this exhibition open, and how can I see it?

Harry and Megan will do the ceremonial honours of opening the venue on Tuesday 17 July. After that, the exhibition will remain in place until Sunday 19 August.

You don’t have to pay to enjoy the journey of Madiba, as entry has been made free. Opening hours will be from 10:00 – 11:00 every day, apart from 17 July when the Duke and Duchess show up.

What is on display at the Nelson Mandela Centenary Exhibition?

As well as a photographic history of Mandela’s early life, imprisonment and rise to power, there will be engaging visuals and video footage retelling one of the greatest human triumphs ever seen.

There will also be items of significant importance on display. The Robben Island Bible – a collection of works written by Shakespeare and annotated by Madiba himself – will be available for attendees to see at the exhibition.

It will also feature one of the pickaxes Mandela used whilst mining the lime quarries of Robben Island – a chore he was forced to do daily in the isolated prison. Visitors will also get the chance to view his letter of thanks to the British public, which he penned during the 1990 Wembley concert on his honour.

It’ll be the first time the iconic address has been put on public display.