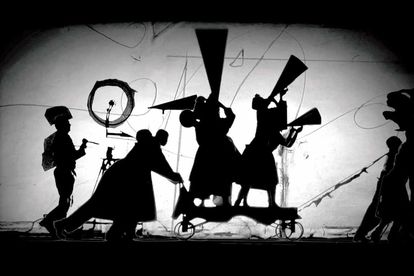 This autumn is William Kentridge season in London. The internationally acclaimed South African artist is back in town to stage a cultural takeover, bringing us not only a major exhibition but a cine-concert and an opera as well. Here are the details:

Johannesburg-based artist William Kentridge is best known for his expressionistic charcoal and ink drawings, which he has animated and turned into several films telling the story of South Africa. His distinctive monochromatic work also explores wider issues such as revolution, colonialism, migration and exile.

Thick Time, his first British solo exhibition in more than 15 years, features several multimedia works created during that period – including the large-scale audio-visual installations The Refusal of Time (2012) and O Sentimental Machine (2015), on show for the first time in the UK.

The exhibition centrepiece, The Refusal of Time, is inspired by a series of conversations between Kentridge and American scientist Peter Galison about theories of time. It combines sculpture, video projections and music to explore the transformation of time into material objects, sound, images and mechanics. The breathing sculpture at its heart is based on 19th century attempts to measure and control time.

“In the centre is large wooden mechanical object like the engine of time and a very rich musical soundtrack pumps through the whole room so you’re enveloped by the projections. In the end it’s about time but really it’s about trying to escape our fate,” explains Kentridge.

This idea of reversing and controlling time, of manipulating the past – “to unremember, to unhappen, to unsave” – is evident throughout the exhibition. In Second Hand Reading we see Kentridge’s drawings on the pages of old books – perhaps an act of overwriting history.

Paper Music is an unusual piece of theatre. There is no plot, rather a series of audiovisual vignettes – like the individual works of an exhibition.

Described as “New music for old drawings. Recent music with recent films. New music written for films yet to be made,” this cine-concert is the latest project in the ongoing collaboration between Kentridge and the composer Philip Miller. It combines film (mostly animations) based on Kentridge’s drawings with live performances by singers Ann Masina and Joanna Dudley, pianist Vincenzo Pasquariello – and recitals by the artist himself. Kentridge often plays both artist and subject; self-portraits and his own performances often feature prominently in his art – as we see here.

Paper Music is a witty and whimsical exploration of language, memory and modern South African society. Like much of Kentridge’s work, it holds universal appeal yet retains a distinctly South African character. ‘Lullaby for House Alarm’, for example, is a playful depiction of a sleepless night caused by neighbours’ alarms – an agony that probably only South Africans will truly understand. I must also mention Dudley’s astonishing vocal acrobatics in recreating these alarm sounds!

LULU
Kentridge will also direct a major new production of Austrian composer Alban Berg’s modernist 20th century masterpiece Lulu (1935) for English National Opera. Kentridge uses his own illustrations as part of the set and production design – his set model is on display in the exhibition Thick Time (see above).

Lulu opens on 9 November at the London Coliseum.
Tickets: www.eno.org/lulu

BBC DOCUMENTARY
Finally, look out for a BBC Imagine TV documentary about Kentridge and his art – to be screened in late November.