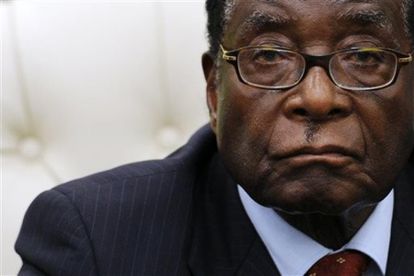 Organised by the Zim Vigil, who have held weekly demonstrations against Mugabe  for over a decade, the Zimbabwean Diaspora were out in force on this occasion. A huge banner depicts all organisations present, from the well known MDC, to ex-pat communities as far apart as South Africa, Australia and the USA.

“We are gathered not to wish Mugabe a happy birthday, but to remind him that it is time to go,”  explains Wilbert  Mukori.  “The situation is totally unsustainable and if he doesn’t go now, the country will be forced into a situation where it changes like other dictatorships like Libya and Egypt.”

Wilbert also argues for a change in the system of Zimbabwe as well as for Mugabe to go.

“2008 was Zimbabwe’s best opportunity for change, but it didn’t happen because the MDC failed to implement reforms.  We can’t blame Mugabe for that, he just took advantage of that.”

Indeed Mr Mukori’s dissatisfaction with the MDC has enabled him to  set up his own party, The  Zimbabwe Social democrats.

The demonstration attracted the attention of all over the continent.  Including activity for democracy in Swaziland and occupy Africa movement were also there and pledged “Total warfare against Zimbabwe” over the microphone.  One of Africa’s oldest liberation movements ZAPU was also in attendance.  Although often described as destroyed by Mugabe’s Fifth brigade in the 1980s, it’s Europeans chairman is proud to say they  still oppose the Zanu government.

“Mugabe tore our party apart,”  says Christopher Maphosa. “Joshua Nkomo  formed a pact with Zanu in 1987, and he clearly failed but in 2008 we broke away and we are in opposition again. Zapu is there. It is present in Zimbabwe.”

He is also of the opinion that they owe Mugabe nothing.  “Mugabe did not defeat Rhodesia,”  he says hotly when this was put to him.  “Zimbabweans participated in the liberation of the country, it was never a one man show, and now our country is in a state of decay, he has destroyed the country.”

In typical African style, the Zimbabwe demonstration contained traditional drumming singing and ululating with a contestant chant: “Mugabe must go”. Feelings are running high as a satirical version of Mugabe dons a mask and trips over a red carpet.  This was because former vice president Joyce Mujuru was hiding underneath it.  “This is a very underfoot move,” he claims as fellow vigil supporters pull him up, “and that is why we threw her out.”  Ephraim Tapa, Head of ROHR Zimbabwe, (the Restoration of Human Rights in Zimbabwe) argues that Mugabe is becoming an international joke.

“He should be restricted to telling fairy stories to children,” he says emphatically. At his last party conference he finished his speech by saying ‘Down with Zanu-PF’.

Makusha Mugabe of the MDC said, “The situation is dire now and our party is back in the trenches again, we are going to fight until there are free and fair elections.”

He argues that unlike 2008 where the economy was in free fall the whole system has broken down.  “There is no electricity now,” Makusha says sadly.  “and there is no water because the waterworks in Harare  were meant to be upgraded but that’s not happened.  People can’t even find sprays to protect their livestock.”  But Makusha also insist that the MDC is the only credible opposition party, despite the recent split between Morgan Tsvangirai  and Tendai Biti.  Kelvin Kamupira agrees the opposition is disunited but insists it is the only possible party who can challenge Mugabe.

“There’s been too much infighting over the years, and that’s weakened the MDC in its ability to get Mugabe out of Power,” Kelvin admits.  “But we’re the only genuine opposition party .  I respect Mukori, he has a great personality, but I think his party’s still too young to lead the government in Zimbabwe.”  Kelvin supports the Tsvangirai faction, but while they re united here today, a Biti supporter told me that Morgan Tsvangirai should step down.  ” If your  party leader lost an election he should step down,” he says.  “These people are my brothers and sisters and I love them, but I keep telling them that Tsvangirai must go.”

Despite the disagreements on who should lead the opposition in Zimbabwe, Mugabe’s birthday has united scores of ex-pats in calling for his departure.  This is shown after the demonstration.  The demonstrators join hands for a solemn but rousing chorus of a Shona protest song. And Ephraim Tapa is convinced the the ex-pats, are Zimbabwe’s best hope.

“Mugabe has control of everything in Zimbabwean,” he explains.  “There is too much fear there, and in 2018 it may not surprise you that Mugabe is still in power.  But in all other South African liberation struggles, it was won by people outside Zimbabwe.”

The general mood was summed up by Mr. Tapa when I asked what his birthday message to Mugabe would be. “I would say, Mugabe, for the sake of Zimbabweans, and for Zimbabwe, please go!”