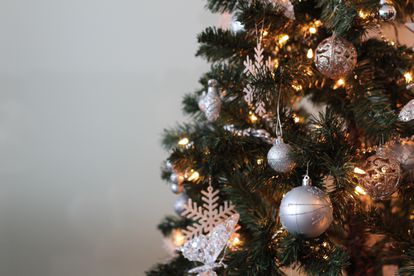 Snakes are unwanted guests on the ChrIstmas tree. Image : Unsplash

Snakes are unwanted guests on the ChrIstmas tree. Image : Unsplash

Last Friday snake rescuer Gerrie Heyns received a call from a homeowner about a snake having made its way into the family’s home in a rural part of the Western Cape.

The snake’s green colouring enabled it to camouflage itself amongst the branches of the Christmas tree. Its movements were what notified the homeowners of the unwanted visitor.

A FIRST FOR SNAKE RESCUER

The homeowner sent photos of the snake which had made its way onto the family’s Christmas tree and was slithering about between the branches. This was a first for Heyns, who said he could not believe what he saw.

“Now this is a first for me! They sent me two photos and I couldn’t believe my eyes! Yes…A Boomslang in their Christmas tree!” Heyns said, as quoted in News24.

LONG WAIT FOR THE SNAKE RESCUER

To help the family rid themselves of the surprise guest, Heyns travelled from his home in Montagu, Western Cape, to the family’s farm situated between Robertson and McGregor, to remove the Boomslang which was exploring the Christmas tree.

Heyns arrived to find the Boomslang moving about between the branches and the decorations on the Christmas tree.  He used his tongs to capture the snake which turned out to be a female Boomslang.

“It was a rural farm area and it took me about 90 minutes to get there. When I got there the snake was still in the Christmas tree. Nevertheless, she got safely removed and I will release her tomorrow,” Heyns said in a media post.

ALSO READ: Is your tenant a slippery customer? Collect your rent – Kenyan-style!

Heyns identified the serpent as a female Boomslang because of its colouring. According to Heyns, a Boomslang’s fangs are located behind its eyes. He said that a lot of people believe that a boomslang bites somebody on a small surface area because it can not open its mouth wide.

However, Heyns said that the species can actually open their mouths to 170 degrees and can bite you on your chest so this is not a snake you want to be bitten by.