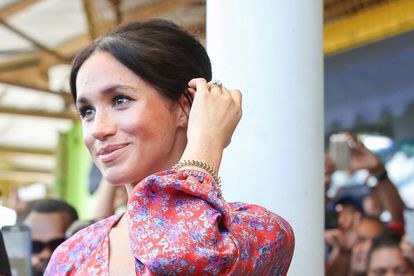 The Duchess of Sussex during a visit to Suva Market, in Suva, Fiji, on day two of the royal couple’s visit to Fiji. Photo: Vantagenews.com / RealTimeImages

The Duchess of Sussex during a visit to Suva Market, in Suva, Fiji, on day two of the royal couple’s visit to Fiji. Photo: Vantagenews.com / RealTimeImages

Meghan Markle, 37, who married into the Royal family back in May, told students at the University of the South Pacific about her struggle with access to higher education.

She highlighted the importance of women having access to higher education and said:

“For women and girls in developing countries, this is vital. Providing them with access to education is the key to economic and social development. When girls are given the right tools to succeed they can create incredible futures, not only for themselves, but for all of those around them.”

Meghan, Duchess of Sussex, delivers a message of female empowerment on tour in Fiji

The soon-to-be first-time mother graduated from Northwestern University in Illinois with a communications degree before pursuing an acting career.

Markle explained that she obtained her degree through scholarship and financial aid programs. She also worked on campus, and the extra earnings went towards her tuition as well. “And, without question, it was worth every effort,” she concluded.

Shayaa Chand, 22, agreed with Markle’s sentiments and thanked the duchess for her support:

“In today’s era we should support women, and we should make them leaders. We are very grateful that Mrs Meghan this that way.”

Prince Harry was also in attendance and was in awe of his wife’s speech. He joked with the students that nothing he said after that would carry the same weight.

The prince also acknowledged the concerns about climate change by announcing that four scholarships would be made available to study the issue. He said:

“All of you living here are confronted with this threat in your daily lives. You’re actually experiencing changing weather patterns, ferocious cyclones and rising sea levels, particularly in Tuvalu and Kiribati. You’ve been living with this for many years, way before the world started talking about it.”

Markle was also set to meet with women participating in the UN project Markets For Change, but the visit was cancelled due to “crowd management issues,” according to Kensington Palace. She was calmly escorted by bodyguards back to her car.

The royal couple arrived in Fiji on October 23 after spending a week in Australia. They appeared relaxed touring while meeting students and pre-school children on campus and later attending a supper hosted by the prime minister and his wife.

SAFiAA designed Meghan’s dress for the evening, and to pay tribute to their hosts, she chose “Fijian Blue” material.

She accessorised with pearl-and-diamond drop earrings gifted to her by the Queen, and also wore a bracelet Prince Charles had given her on her wedding day back in May.