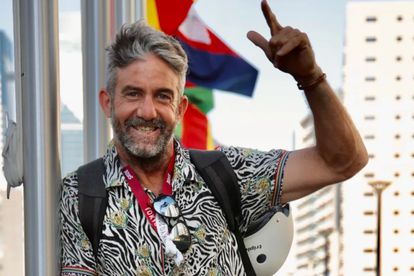 Dallas Oberholzer is South Africa’s oldest competitor at the delayed 2020 Tokyo Olympics – and has arguably the most fascinating story to tell. Photo: Team SA

Dallas Oberholzer is South Africa’s oldest competitor at the delayed 2020 Tokyo Olympics – and has arguably the most fascinating story to tell. Photo: Team SA

Dallas Oberholzer is South Africa’s oldest competitor at the delayed 2020 Tokyo Olympics – and has arguably the most fascinating story to tell.

While the 46-year-old ‘salt and pepper’ bearded Oberholzer knew he wasn’t a medal contender, he did manage to achieve one lifelong goal.

“You know what a good feeling that is? It’s taken that long for my mom to acknowledge what I do with my life… That’s probably the best thing I’m taking out of this, is that my mom finally goes, ‘Wow.’”

“I’m not going to win. I am not going to get a medal,” he explained pre-event, fully expecting to be schooled by skaters less than half of his age.

“It’s all expenses paid and it’s going to be the best course I would have ever skated in my life.”

And that’s exactly what happened in the men’s park event which was dominated by teenagers – and pre-teens.

In a wide-ranging interview with the official Tokyo Olympics website, Dallas Oberholzer said his whole existence “has just been skateboarding” and following a brief tennis stint, he got his start in 1986.

“A few of us got together, and we started, you know, just hanging out together and learning from one another and realising the potential and slowly discovering this mystical act,” said Oberholzer, who discovered skateboarding through motion pictures like Thrashin’ (the 1986 drama starring Josh Brolin that featured skate legends Tony Alva, Tony Hawk, Christian Hosoi and Steve Caballero).

“It was the closest we could get to, you know, like living the dream on a surfboard or California dreaming,” Oberholzer remembered.

“I remember just thinking to myself, ‘I could play tennis and let the ball have all the fun or I could be the ball..

Two decades ago, Oberholzer moved to Durban because of its thriving skate scene and all-year-round warm weather. A Tony Hawk-designed skatepark had opened, attracting riders like Oberholzer and his crew.

The freewheeling Oberholzer had a desire to set up a youth skateboarding camp which led him to Isithumba, one of the Zulu villages in the Valley of a Thousand Hills. He secured a piece of land from some of the local chiefs, where he built a skatepark in the heart of the valley surrounded by the green hills and rondavels of the local people.

“The whole concept originally was integrating wealthier children from the suburbs to come and engage with the African community. Basically to share the experience of skateboarding, which is just something that happens, naturally,” Oberholzer said of the early beginnings of his non-profit, Indigo Youth Movement.

“Through that process I also realised that the only way skateboarding was going to gain popularity was to bring it to people of colour because at that time it was mostly a white sport 20 years ago,” he went on.

His passion-project has turned into a full-blown non-profit organisation where he’s spreading the love of skateboarding and building skateparks in some of the most impoverished areas in the country.

Some of the participants and kids that were part of the camps went on to help Oberholzer build skateparks, ramps and concrete pools, becoming the custodians of the parks.

And while he has touched the lives of children in the local area through skateboarding, Oberholzer is quick to point out how the village has enriched his life.

“It’s the only place that I have, the only solid thing I have in my life,” Oberholzer said.

“You know, I’ve been a travelling skateboarder. Every time I travel to every event, I come back to empty pockets and nowhere to go. Dude, if it wasn’t for this village, this is what kept me afloat.”

Here’s hoping we see then 49-year-old Dallas Oberholzer at the next Olympics in Paris in 2024!