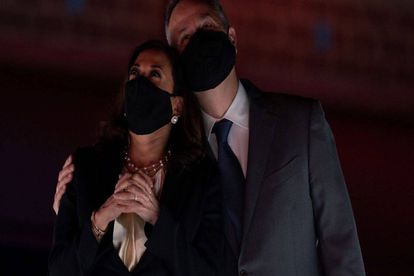 The first official “Second Gentlemen” of the United States (US), Douglas Emhoff, said that he stands on the shoulders of generations of women who stood before him as he builds on their legacy, according to an article published in GQ on Tuesday 19 January.

Douglass Emhoff is the proud husband and the man behind Kamala Harris who was inaugurated as America’s first female vice president on Wednesday 20 January.

EMHOFF ON HIS UNIQUE PLACE IN HISTORY

As far as American history goes, there has always been a first or second lady to the president or vice president respectively with Emhoff therefore becoming the first-ever “second gentlemen” of the US.

On the week of the inauguration, his historic title became official when the administration created the @SecondGentleman Twitter handle for Emhoff.

Emhoff was previously an entertainment lawyer and has left his job at Los Angeles law firm DLA Piper to fulfil his new political role. The couple’s professional lives remained separate until US President Joe Biden asked Harris to join his campaign as his running mate.

“That changed the day Joe Biden called and asked her to join the ticket as his running mate. On that day, it quickly became clear that this wasn’t just about my love for my wife, but also about my love for this country,” said Emhoff to GQ.

“This was about something bigger than either of us,” he added.

STANDING ON THE SHOULDERS OF WOMEN BEFORE HIM

Emhoff stated that it is an honour to be the first male spouse of a US vice president and he acknowledged the generations of women before him who used this platform to advocate for the causes they believe in –and said it is on the shoulders of these women that he now stands to build on their legacy.

“Generations of women before me have used this platform to advocate for causes they believe in and build trust in our institutions at home and abroad — often without much accolade or acknowledgment,” said Emhoff to GQ.

“It’s on their shoulders I stand. And it’s their legacy of progress I will try to build on as Second Gentleman,” he added.

FIRST, BUT NOT THE LAST

Karen Batten Pence, wife of former vice president Mike Pence, previously held the title of second lady. Emhoff said he may be the first “Second Gentlemen”, but he does not want to be the last.

“It reminds me of a story Kamala likes to tell about her mother, Shyamala, who would always say to her daughters: ‘You may be the first, but you better not be the last’,” said Emhoff to GQ.

“I want that to be true of me, too. I may be the first Second Gentleman, but I know I won’t be the last,” he added.

As the “Second Gentlemen”, he plans to advocate on behalf of the legal justice reform to help people gain fair access to the legal system.