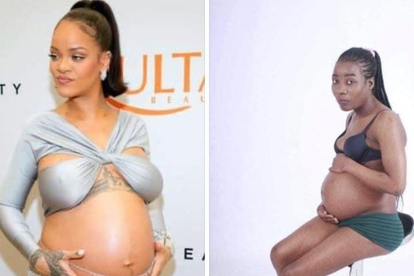 A young mother-to-be’s happiness for her pregnancy quickly turned to sadness after her impromptu pregnancy photo shoot has gone viral. The young mom — who couldn’t afford to splurge on a maternity outfit and expensive makeup — was mocked on social media, with people calling her a “wannabe Rihanna” because she sports everyday underwear in her maternity photos.

After spotting the commotion around the shoot, a kind local woman reached out to the mom-to-be who has since been treated to a professional shoot with makeup and beautiful maternity wear.

Not everyone can afford to go all out when it comes to pregnancy shoots.

Instead of letting that hold her back, 32-year-old Precious Selephi Ndlovu agreed to do a photo shoot at a local shopping centre.

Little did she know the photos from the shoot would go viral online when people resorted to mocking her.

Speaking to IOL, Precious shared how she agreed to take some pictures of her bulging belly, especially because it was offered to her for free.

After the shoot, the photographer shared the photos online and they went viral.

After spotting all of the mockings, Limpopo artist King Monada and many others reached out to her online.

Help is on the way

“We are one of those who are willing to help her dream come true,” King Monada posted on his verified Facebook page with 2.8 million followers.

While she hasn’t received help from Monada, she did get help from a woman who organised a professional shoot for her:

“From the hundreds of people ‘hunting’, it was only Ms Zuva Urban Tete on Facebook who located me through her vast networks, and with her good intentions. She then linked me up with Ms Sandra Juliet Yellow Bello who runs popular businesses Royal Preggy Mamas and Bello Fab Baby at Southgate Mall in Joburg with her husband. Those have been angels sent by God himself,” said Ndlovu.

Her hair and nails were done and off she went to the studio to take some photos which she is truly proud of.