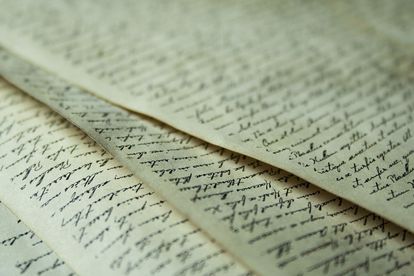 A letter from a grandfather to his granddaughter has been found at OR Tambo International. Image via Pixabay

A letter from a grandfather to his granddaughter has been found at OR Tambo International. Image via Pixabay

A letter written by a grandfather was recently found by a police officer at the Johannesburg airport. The determined cop is on a mission to trace the lost letter back to its sender or to the intended recipient.

According to News24, a man attempted to put a handwritten letter to his granddaughter Nikka in her baggage.

The letter however was found by a staff member in the domestic terminal at OR Tambo International Airport and was passed on to Sergeant Vanessa Subramoney on Tuesday 4 January.

“The grandfather had written about how he had enjoyed spending time with his granddaughter. If I had been that child, I would have cherished something like this.”

The envelope is written: “Maak eers oop by die huis” which translates from Afrikaans to: “Only open once at home”.

HOW TO CLAIM THE LOST LETTER

Subramoney mentioned that her grandfather had passed away and a letter similar to the one found at the airport would be sentimental to her.

“I’m hoping to find the rightful owner,” she added.

The letter is currently at the OR Tambo International Airport police station and anyone looking to claim it will have to supply proof of identity and confirm the contents of the soft-hearted letter. The person hoping to claim it will also be required to fill out the necessary documentation.

HOW LONG A LETTER SHOULD TAKE TO REACH YOU

According to the SA Post Office, a letter sent within the same town or city should take two days to reach its recipient. If the letter is travelling between two provinces or two cities, the letter should take four days.

If the letter’s destination is anywhere beyond South African boarders it should take 10 days. In South Africa, if a letter is unclaimed, it will be sent back to the sender within 60 days from the date of its arrival.