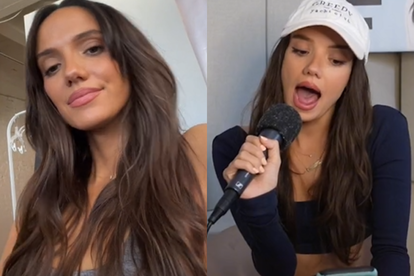 This young woman sends herself drinks while she’s on a date. Images via TikTok: @sofiafranklyn

This young woman sends herself drinks while she’s on a date. Images via TikTok: @sofiafranklyn

A young woman just made a bizarre revelation on TikTok and folks can’t decide whether it’s absolutely crazy or stupidly genius. According to the TikToker, she sends herself drinks from “secret admirers” while she’s on dates so her date can think she’s in demand.

Many have expressed that she may have deep-rooted insecurity issues.

People are known to do bizarre things especially when it comes to love, romance and, relationships. One young woman recently headed to her TikTok page to share some dating advice with her followers who were left feeling unsure of what she had to say.

In her viral video, Sofia Franklyn shares how she has found a way to make sure the men she goes on dates with know that she is a woman who everyone wants.

According to her, she always makes sure to send herself a drink from a secret admirer while she’s on a date so that the person who she’s out with can think she is on “demand”.

“When I ‘got to the bathroom’ and pay the bartender to send me an ‘anonymous’ shot so my date remembers I have options,” she can be heard saying in the clip which received over 2 million views so far.

Some people slammed Sofia as someone who has very little confidence while others thought it was some solid advice. Here are some of their comments:

“Going to do this in my healthy relationship next time we’re out.”

“Ok but this actually happened to me ONCE and it was THE BEST feeling ever my date was left shaking.”