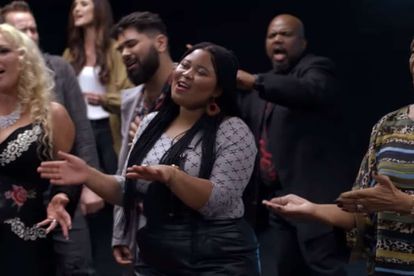 Once in a while, everything perfectly aligns to punch you right in the feels, as the kids would say. It doesn’t have to be anything profound, just something honest.

If you haven’t seen the collaboration of some 50 South African musicians for a cover of Johnny Clegg’s The Crossing, go watch it. Then, donate to his charity. Done? Okay, let’s carry on.

At the risk of being a “this is what tartar would have wanted” umlungu, this is surely one of the most poignant musical colabs since die Engelsman himself put his gumboots on and learned Zulu.

On its own, Clegg and Savuka’s lyrical prowess is enough to jilt you. Delivered by the man himself, the song is enchanting.

The collaborative version is something else.

It’s the kind of goose bump, bottle it and keep it close forever stuff all artists want to create.

South Africa and perhaps the world is in a funny space. Spend any sort of time on social media and you’d be sure we’re all about ready to go full Greek mythology on each other. You know, surreal violence that would make Game of Thrones blush.

And look, shit’s rough. Let’s not kid ourselves. Crime is violent. Wars are raging. The coal is wet and the Blitzboks lost against the damn English again in the Dubai opener.

But tune out of the noise and into music and perceptions will shift.

The song, recorded as a special tribute to the Lancastrian, features some 50-odd of South Africa’s most famous musicians. And it’s all for a good cause. The song was recorded to raise funds for education in South Africa.

Considering its racked up thousands of hours of airplay in less than 24 hours, those fundraising efforts are likely to exceed expectation.

The fundraising, though, is just one part of it.

It’s also diverse. And the video reflects this beautifully simplistically.

Zolani raising her hand reaching for those notes she hits so exquisitely, reminding us she was the real star of the Waka Waka song. Jack Parrow’s brief moment of rapping,  Mahlasela booming back with his outstretched arms, David Kramer’s wry smile at around the 2:26 mark, that smile of somebody who has been around the block and knows it’ll be okay.

It’s a beautiful thing. And it’s a wonderfully South African thing. A small gesture, a gentle nudge to remind us that as batshit crazy as this place is, we’ve got far more in common than what those who make the most noise want us to believe.

If more than 50 musicians, all from different backgrounds, all with varying degrees of ego, can make something as beautiful as this… imagine what 50 million of us could do.

No, learning a few verses in Zulu and singing kumbaya isn’t going magically fix everything. But…

Thank you, Johnny Clegg and of Johnny Clegg for the subtlest reminders of what is possible. And thanks for reminding another umlungu to keep practicing those , x, c and qs.