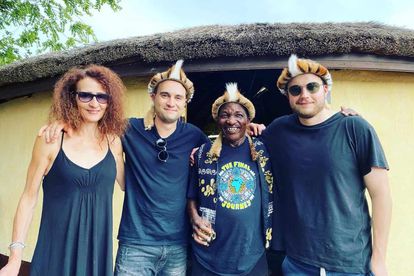 Jesse and other family members travelled to the homestead of Johnny’s former bandmate, Sipho Mchunu, on 9 and 10 February.

At Mchunu’s house in Blythedale Beach, KwaZulu-Natal, Jesse shared that friends and family held an important ritual as part of his father’s spiritual crossing.

Tweets in response to this were heartwarming, with some sharing their continued love for Johnny Clegg, and others mourning his physical absence.

Still others shared their favourite memories and songs.

The ritual recently conducted for Johnny comes almost five years after the iconic musician was diagnosed with pancreatic cancer in 2015.  The disease ultimately took his life on 16 July 2019. Johnny is reported to have died at the age of 66 in his Johannesburg home surrounded by loved ones and was laid to rest the following day in Westpark Cemetery in Johannesburg.

Jesse has followed in his father’s musical footsteps. He’s a singer-songwriter, guitarist and pianist, whose three studio albums — When I Wake Up, his 2011 follow-up, Life on Mars, and his latest, Things Unseen — have made him a platinum-selling success.

Johnny and Sipho, formed their duo band, Juluka, in 1969. They were the first group in the South African apartheid era comprising of a white man and a black man.

Juluka went to become a six-member group by the time it released its first album, Universal Men, in 1979. Despite being ignored and often harassed by the South African government, Juluka were able to tour internationally, playing in Europe, Canada, and the United States (US).