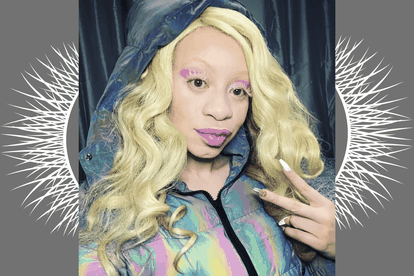 Beauty influencers try out different makeup products on themselves to show their followers how they look, and give them tips on how to play around with different colours.

However, Renee often found she could not complete her makeup look because she was always missing a pair of eyelashes. So guess what she decided to do? She created her own makeup range for people with albinism.

The woman behind the brand

Renee is a beauty influencer with albinism, a rare genetic disorder inherited at birth.

People with albinism have little or no melanin and as a result of this, have very fair skin, light eyes and blonde hair. Because of this colouration, however, it was difficult for Renee to find lashes that suited her.

She asked the women in her Albinism Beauty Chat group about products they had the most difficulty to find. They were unanimous in saying that blonde eyelashes were hard to come by.

With the help of some friends she was able to answer their call, launching Ivoree Beauty in January this year to not only help herself, but others as well.

Ivoree Beauty is described as an affordable collection of mink eyelashes designed for “the fairest of them all” as its Instagram page so fittingly advertises.

Renee told HelloBeautiful that this was just supposed to be a small thing for her albinism community, but it has blown up in a way that she didn’t anticipate.

She has even had to add different shades of lashes to cater for her growing customer base.

“At first it was just for the albinism community, but when I saw that other people wanted lashes to match their hair, I was like ‘okay, we can make this a thing’.

To cater for those who have always felt left out, Renee offers blonde and white 3D mink lashes which are called Blonde and Icee respectively. She has since added an auburn colour called Aubree to match the red hair of other women who felt marginalised by the lash beauty industry.