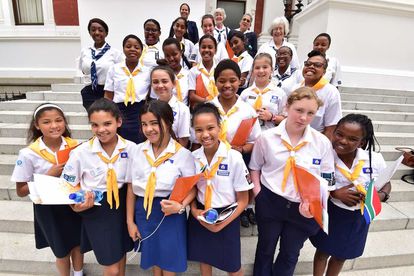 Minister Nkosazana Dlamini Zuma hosts 20 girl guides for the International Day of the Girl Child. The girl guides were also taken on a tour of Parliament. Photo: Flickr/GCIS

Minister Nkosazana Dlamini Zuma hosts 20 girl guides for the International Day of the Girl Child. The girl guides were also taken on a tour of Parliament. Photo: Flickr/GCIS

On 11 October 2019, the world commemorates International Day of the Girl. The annual celebration highlights the many ways gender inequality impacts young girls and their human rights.

In 2012, the day was observed for the first time after being created by the United Nations (UN). The organisation created the day to “address discrimination against girls in all spheres of life.”

International Day of the Girl observed

The commemoration will aim to affect over one billion girls across the world, according to the UN. On this day, governments, society, and organisations have an opportunity to raise awareness about the challenges faced by girls.

The theme for this year is “GirlForce: Unscripted and Unstoppable.” The event aims to celebrate the achievements made by girls since the 1995 adoption of the Beijing Declaration and Platform for Action (Beijing Declaration).

The 12 areas of concern identified for women

The Beijing Declaration identified 12 areas of concern for women:

Issues faced by the girl child are tackled in various ways. These include government-sponsored policies and social media campaigns that bring visible changes.

Some of these movements are organised by young girls. They address issues like human trafficking, climate change, education, safe water, child marriage, and gender-based violence.

Since 1995, girls have been gaining from the event. More girls are being enrolled and finish school, exposure to skills and training, fewer girls are taken as child brides, and progress has been made in the abolition of female genital mutilation.

However, more must be done to help girls access their basic human rights as the numbers are still concerning.

Some of the international statistics that girl children still battle with are:

Some of the South African crime statistics that girl children still battle with are:

On behalf of the Centre for Constitutional Rights (CFCR), Rebecca Sibanda, the Legal Officer, said:

“On this International Day of the Girl, the Centre for Constitutional Rights (CFCR) applauds all the young girls using whatever resources they have to call for social, economic and political change. The CFCR also stands with the various civil society organisations working tirelessly to protect and promote the rights of young girls.”