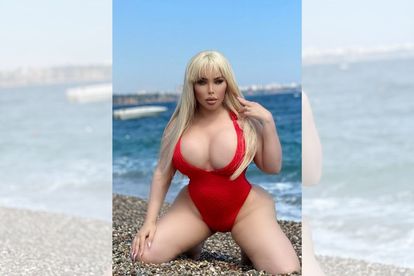 Many women around the world aspire to look like a walking, talking Barbie doll…But not many women can say they started off as a “Human Ken Doll” first!

Jessica Alves is the first known person to proudly show off both looks after she underwent gender reassignment surgery earlier this year.

The 36-year-old Brazilian-born cosmetic surgery addict said in an Instagram Live video: “I’m very happy because I got my new birth certificate today, here in Santo Amaro where I was born and registered.

“For me, it’s a very important achievement. Now my name is correct, as it should be”.

In 2014, the socialite announced her then goal to become a human Ken doll, with the help of plastic surgery.

Fast-forward to 2020 and the star made the surprising announcement that she aspired to become a human Barbie instead.

Jessica – who had her first cosmetic surgery at the age of 17 – has now fully transitioned and is living her best life.

With long blonde extensions, an hourglass figure and chiseled cheekbones, Jessica has travelled around the world spending hundreds of thousands of dollars in her “quest for perfection”.

She’s had over 75 plastic surgeries – and the latest includes a gastric sleeve recently fitted in Turkey.

She captioned one of her most recent Instagram posts: “The very first step toward change is to believe that you can. You don’t have to stay the way you are because God is a God of change and transformation. He can bring change to your life and bring the best out of you” she captioned a pic following the procedure”.

JESSICA ADMITS TO LOSING HER VIRGINITY AS A WOMAN

The “human Barbie” has also confessed to losing her virginity since becoming a woman.

She told Brazilian TV show Superpop: “My first time was painful after sex. I had to take painkillers and stay in bed!

“When I called the surgeon in Thailand he said that the pain was normal. And so was a little blood.”