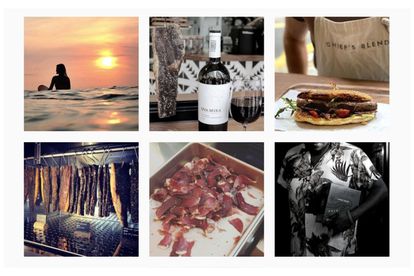 A taste of South Africa in Hong Kong

According to Good Things Guy, the three of them joined forces while playing rugby at different stages of their careers, and after many years of working together on the field, decided to open the café. The new café is called Chief’s Blend – which is a collaboration between Biltong Chief (owned by Rosslee and Rogers) and Blend & Grind (owned by Rees).

It is said that Rosslee and Rogers grew up in South Africa and met while playing rugby at the University of Cape Town. Rees, who is originally from England, met them on the pitch playing for the Hong Kong national 15’s squad, and the three have been good friends ever since.

“[The idea] was really born out of our friendship,” said Rees, who has been in Hong Kong since 2009, according to South China Morning Post. “Just chats over dinners and beers, and it went from there.”

For the love of biltong

The meat store, Biltong Chief, reportedly sources meat from a butcher in South Africa with more than 50 years of experience. Rosslee said he noticed a gap in the market, where people wanted to get the products he was offering at short notice.

“We would get a lot of requests from people who would say ‘I’ve got a barbecue this weekend, or a party I’m going to this weekend and I want to get some meats,’ and we wouldn’t be able to order for them in time. So this helps with that.”

A unique offering – with a South African twist

What’s more, it has the first and only dedicated biltong bar in Hong Kong, bringing a uniquely South African experience and atmosphere to the city… which locals are loving!

“We work with a small group of trusted vendors and distributors, mostly we procure the products directly from the farmers and suppliers to bring the finest products with full traceability to our growing community of shoppers,” their official website states.

While restaurants and bars have been forced to close down at night in Hong Kong due to COVID-19 restrictions, cafés and eateries are reportedly open and flourishing during the day.

“It’s a bit deceptive, coming from the cafe and takeaway industry – it’s actually a pretty good time,” Rees said. “It goes against what people think, this kind of concept. It’s been a pretty fruitful year. Also taking a plunge in a dodgy climate brings a bit more fun with it, and cheaper rent of course.”