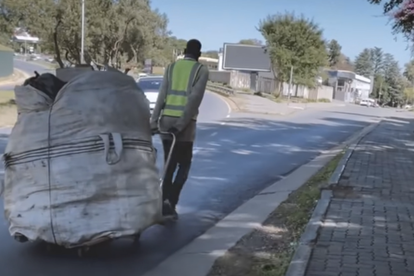 This homeless graduate refuses to give up on himself. Image via YouTube: @ewn

This homeless graduate refuses to give up on himself. Image via YouTube: @ewn

Gibson Nzimande was well on his way to success when tragedy struck. After graduating from the University of Johannesburg and enrolling for his master’s, his plans were put on hold after his mom passed away and a family feud over her house and belongings saw him lose everything leaving him homeless.

He was then forced to drop out of school and take to the streets of Sandton where he started recycling bottles and cans to get by.

Homeless graduate sees light at the end of the tunnel

34-year-old Gibson Ndzimande’s story is one that brought tears to many eyes.

According to Eyewitness News, the young man, an honour’s degree holder, was about to get his master’s degree when his mother’s death saw him lose everything.

Despite having a BA in Humanities and a BA honours in Gender Studies, he started living in the streets while trying to make a living through recycling and scrap collecting.

He also shared that he is unable to go back to school but continues to visit libraries to study literature.

Help is on the way

Things changed for him when his former UJ lecturer, Brett Bennet saw him telling his story on TV and decided to offer a helping hand.

“We set him up with clothes and we have been coordinating with the university and also just finding out this amazing story about this network he has and this resilience – it’s so emotional and we are so happy that he can restart,” Bennett said.

Nzimande has said that he never gave up on his dreams of becoming a lecturer and is adamant that one day he’ll be exactly where he wants to be.

“Challenges mustn’t bury you but rather teach you a lesson. I took it as a challenge but for me, it was something to grow me in life,” Nzimande said according to a 702 article.

Watch him tell his story below: