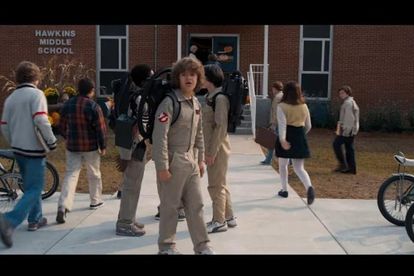 If you’re a big fan of the hit series Stranger Things, you probably can’t wait for the premiere of Season 2 anymore.

Netflix released a teaser trailer during the Super Bowl and fans completely lost their minds while analyzing every little detail of the 36 second trailer.

Some fans even went as far as breaking down every single frame to try and figure out wtf we can expect. Here’s what they found:

This monster might be a new threat in Season 2 even though no one is sure what it is exactly. At the end of Season 1 some suggested that the monster defeated by the boys in Dungeons and Dragons called Thessalhydra – during the “One Month Later” scene in the final episode – would come back in Season 2. In fact, there’s quite a few theories on it.

As we know, Will Byers is pretty good at drawing. The drawing above looks like the monster he sees in the trailer and it seems safe to say he created this sketch. What fans are speculating is that the last scene of the trailer is either a dream or a vision, similar to what Will experienced in the bathroom at the end of Season 1. He draws these sketches in order to make sense of what he saw.

The second Season is set in 1984, one year after the events of Season 1. It is also the year the movie ‘Ghostbusters’ hit theaters. In this photo the kids are wearing proton packs, which goes to show the impact ‘Ghostbusters’ had on kids during the 80’s. You’ll also see them dressed in ‘Ghostbuster’ outfits later in the trailer, presumably for Halloween.

1984 is going to be a strange year. pic.twitter.com/cD2usFZRKJ

We know Will has some sort of vision/dream featuring a monster, framed by storm clouds looming over the horizon of Hawkins; episode titles reveal episode five of Season 2 is called “The Storm”; in the trailer we also see Dustin looking up into the sky witnessing something terrible.

The guys from Mashable predicts that the aforementioned storm will take place in episode five of Season 2, and will involve Hawkins being visited by a freak weather condition that somehow opens the door to the Upside Down.

Fans are saying this scene is in fact Will Buyers undergoing some sort of neurological test. If you remember correctly, Will was secretly vomiting up weird slug creatures and having flashes of the upside down at the end of Season 1. It looks like his mother Joyce might have taken him to get medical attention. It also shows that he undergoes this tests the day before Halloween.

This frame suggests that this isn’t a security camera in a doctor’s office, but very likely a secret facility operated by the Department of Energy.

In this frame Hopper digs or thrusts into something…which is a complete mystery to all. What could he be doing?

You’ll have to find out this coming Halloween when the highly anticipated show returns for the second time. Watch the trailer over here: