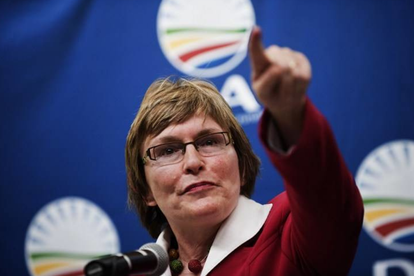 South Africans have been left with their heads in their hands this week as the country’s load shedding went from bad to worse with a stage 6 upgrade. On Tuesday morning, Eskom announced the news much to the dismay of households and businesses which have been heavily impacted by the continuous power outages.

In Cape Town, however, residents have been subjected to stage 4 and not 6, something former Democratic Alliance (DA) leader and current DA Federal Council chair Hellen Zille poked fun about on her Twitter page earlier today.

While the rest of the country is being subjected to four-and-a-half hours of power outages at a time, people in Cape Town are dealing with the usual two and a half slots.

While there’s really nothing to celebrate about load shedding, it must be nice not having so much of your working day robbed from you – at least that last what Helen Zille thinks.

Taking to Twitter, Zille shared a cheeky meme about Eskom trying to flip the switch with stage 6 load shedding on South Africa, but Cape Town hitting back with only stage 4.

The City has been shielded from the heavier load shedding burden because it makes use of the Steenbras Hydro Pump Station which generates electricity in the area.

“The 180MW Steenbras Hydro Pump Station (SHPS) is a pumped storage scheme, which consists of four turbines that are used to generate electricity.

“The City of Cape Town’s Mayoral Committee Member for Energy, Beverley van Reenen, explained that, during peak electricity demand, the pump station channels water from the upper Steenbras reservoir to the lower reservoir through the turbine generator, to create electricity,” per a 2OceansVibe article.

While this is a nice little way of lightening the load shedding load, if Eskom continues to implement a harsher load shedding schedule, Cape Town may no longer be able to keep their people on a stage 4 schedule.

For now, though, Steenbras is “humming along like a well-oiled machine, and that really is the secret”, says the City of Cape Town mayor Geordin Hill-Lewis.

ALSO READ: How to join thousands of South Africans who are getting off Eskom’s grid