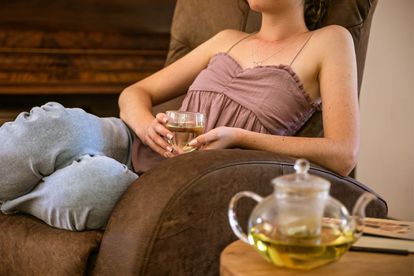 The health benefits of rooibos
Image via Christelle Leuvennink/Getty

The health benefits of rooibos
Image via Christelle Leuvennink/Getty

Everyone loves a good cuppa tea. But did you know that drinking rooibos has a multitude of health benefits too?

The South African herb used to brew the distinctive tea has been hailed for its rejuvenating, repairing and restoring properties around the world

ROOIBOS IS RICH IN ANTIOXIDANTS

Rooibos contains a complex and abundant blend of antioxidants. The local herb is the only known source of a specifically beneficial and rare antioxidant called aspalathin.

Unfermented (green) rooibos has higher levels of antioxidants than the traditional, fermented kind

The antioxidants in the tea are potent enough to measurably elevate the antioxidant levels in blood, thereby boosting the body’s internal defence systems against disease. The effect peaks about one hour after drinking just 500 ml of the tea.

The antioxidant content of rooibos also depends on the soil conditions of the region where the plant was grown, and on how the infusion was prepared, i.e. ratio of leaves to water, temperature of the water, extraction time, stirring, etcetera.

Rooibos slows down the development of cancerous skin lesions. The complex mixture of polyphenols in it may help protect against free radicals.

Rooibos is naturally caffeine-free (no decaffeination required) and is low in tannin.

Many people report that it relieves allergies, sleep disorders, digestive problems and headaches. However, these claims are not yet supported by scientific research.

Many physicians (especially in South Africa) recommend rooibos to soothe infant colic, but no formal studies have been done on this.

The tea can be enjoyed by those who want to avoid the stimulating effects of caffeine, especially late at night. Because of its zero caffeine content, it is also suitable for babies and infants, as well as for breast-feeding mothers.

Rooibos is suitable as a fluid and electrolyte replacement for athletes.