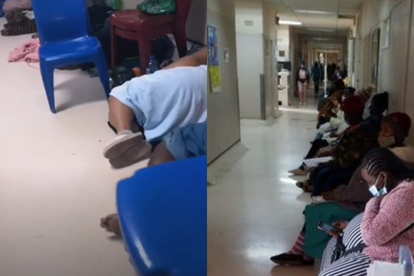 South Africans have been left fuming after watching a clip of pregnant women sleeping on cold hard floors at Rahima Moosa Mother and Child hospital in Johannesburg. The video was taken and shared by Joburg’s MMC for Health and Social Development Ashley Sauls who visited the hospital after hearing about the situation at the hospital.

It is no secret that South African public hospitals leave a lot to be desired in terms of service and quality treatment of patients.

A new light has been cast on the dire condition of public hospitals by Joburg’s MMC for Health and Social Development Ashley Sauls who recently visited Rahima Moosa and was left appalled by how pregnant women on the verge of giving birth were being treated.

In a live video posted on his Facebook, the MMC visited the hospital just after midnight where he recorded women sleeping on floors and chairs at the hospital.

According to the MMC, some of the women had been there for over three days waiting for a bed.

After speaking to those in charge, Sauls heard that the beds were fully occupied and there was basically nothing nurses and doctors could do about the situation at the hospital.

“Got news at 00:30 that pregnant women at Rahima Moosa hospital are sleeping on the floor for up to 3 days. I went there immediately and sadly found it to be true. We cannot allow this to continue. We must restore the heart of service,” wrote Sauls in the caption of the video.

The post sparked instant outrage by social media users, some of who had visited the hospital before and could attest to the terrible treatment of patients at the hospital.

When one looks at the hospital reviews, one came across a number of complaints made by patients who had suffered at the hands of either the nurses and doctors or were just disgusted with the hospital’s upkeep and cleanliness.

“Rahima Moosa Need to be investigated, I’m a witness, I’ve nearly lost my baby because of their negligence, majority of the nurse in the labour ward treat people like we are not human beings, regardless if you’re a foreigner or not.”

The hospital defends itself

In an exclusive statement to Jacaranda FM, officials at Rahima Moosa said:

“The hospital does not have a policy of turning away patients. We receive and treat patients as they arrive at the facility and refer them where possible. Patients are unfortunately accommodated on chairs at night if we are at capacity, those that were on chairs in the video are now in beds inwards.

“Patients don’t usually spend more than two nights in a chair – it is distressing for both workers and patients as we struggle to care for them as we would like to.”

Meanwhile, Dr Nozuko Mkabayi, CEO of the hospital, slammed the MMC for visiting the hospital and recording the women on the floor.

She also added that over 40% of the patients at the hospital are undocumented foreign nationals.

“I must say he violated every single rule not just of the hospital but he violated patients’ rights. He came under false pretenses at midnight. We are not allowed to take footage in the hospital and those women were pregnant women in compromising positions.

“About 40% of the patient load is foreign patients. Whether they are documents or not documented is not our forte.,” she said according to a 702 article.

The MEC for Health Dr Mokgethi has since visited the hospital to discuss the horrific conditions.