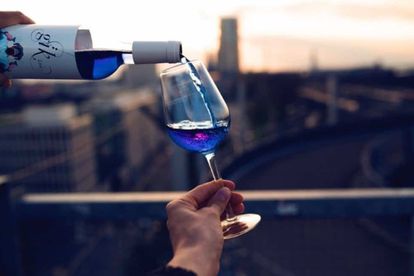 A non-traditional kind of wine is hitting stores in the UK…and yes it is in fact blue and totally legit. Talk about new and improved.

A Spanish company called Gik (Not Jik as in the bleach, no) are set to revolutionize the Spanish wine industry, which is deeply attached to tradition.

The masterminds and creators of the idea consists of six young entrepreneurs who wrote on their website: “Gik represents the innovative side of life, because that’s how we are. We believe in the creative rebellion, we build new things, break with the past and create our future.”

With help from the University of the Basque Country and Food Tech research departments they’ve ultimately succeeded to create that future.

Gik has a guarantee of quality and unique flavor. The wine comes from different Spanish and French vineyards, whose grapes are ultimately transformed. The wine is produced through a pigmentation process: First off white and red grapes are mixed and added to two organic pigments called; indigo and anthocyanin – which comes from the skin of the grapes used.

Non-caloric sweeteners are then used to modify the flavor and create a sweet drink with 11,5% alcohol per volume.

So why exactly blue?, you might ask. Well the creators stated:

“We are not vintners. We are creators. So we sought the most traditional and closed minded industry out there. Once having selected the wine industry as our battlefield, we set about creating a radically different product, changing the color to a vibrant blue and making the wine sweeter and easier to drink.”

According to the Independent, the color blue also has a deeper meaning behind it than you might think and comes from a book called the Blue Ocean Strategy.

One of the co-founders, Aritz Lopez said: “The book says there are two kind of oceans: the red ones, full of sharks (competitors) fighting against each other for a few fishes (clients) and turning the ocean red because of the blood. And it talked about creating blue oceans: oceans where, thanks to creativity and innovation, everyone could be free.”

Hopefully we will find this in South African stores very soon. It simply looks divine!