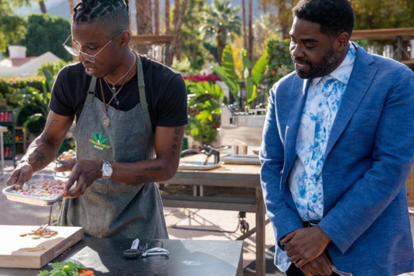 Chopped 420 is set to debut on 20 April. Image: Instagram/mediafanatik

Chopped 420 is set to debut on 20 April. Image: Instagram/mediafanatik

As marijuana becomes legalised throughout the United States (US), cannabis cooking shows have started to gain traction with audiences across the world.

On Netflix, there’s Cooked with Cannabis and now the American reality Chopped series is getting its own marijuana-themed episode on The Food Network.

According to Deadline magazine, the show is set to be hosted by US comedian and actor Ron Funches. The panel of judges will include chef Esther Choi, chef Luke Reyes, chef Sam Talbot, cannabis activist Laganja Estranja, and comedian Tacarra Williams.

Cannabis cooking shows: Not just to get ‘high’

Marijuana offers a lot more to the culinary world than just getting “high”.

Many have started incorporating it into foods, not only for its hallucinogenic properties, but rather as a component that elevates the flavour. Different parts of the herb can also be used to add new textures while amplifying certain flavours and ingredients in each dish.

CBD remains mired in a legal grey area but as some background on There are two main cannabis extracts in the market: THC, the psychoactive substance which gives you a “high”, and CBD, which does not. While this industrial hemp is defined as containing less than 0.3% THC, it can still contain high levels of CBD.

Marijuana is usually cultivated precisely because of its THC content.

420 Cafes: Coffee with a dash of cannabis?

While cannabis cooking shows gain traction within the online streaming space, the rise of 420 cafes is another fast-growing concept in towns and cities across the world.

At these establishments, marijuana edibles and joints are consumed openly but you’re also likely to find roasted coffee beans infused with hemp CBD, so if you’re keen to head in for a cuppa without getting ‘klapped’, make sure to ask before ordering.

While this is nothing new to the city of Amsterdam, the city is said to be barring entry for foreigners into these local establishments.

The proposed plan, outlined earlier this year by Femke Halsema, the city’s mayor, will only allow Dutch nationals and residents of the Netherlands to buy marijuana products from these local cafes dotted across the city.

At current, 16 states in the US decriminalise the use of cannabis, while 36 states have made it legal for medical purposes.