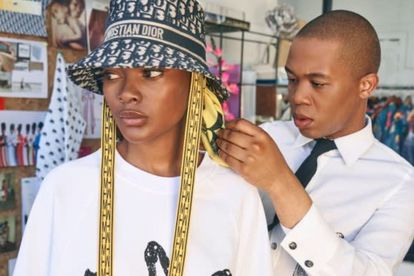 South African fashion designer Thebe Magugu has partnered luxury French brand, Dior, on an exclusive capsule collection. According to WWD, the proceeds for the collection will be donated to the Charlize Theron Africa Outreach Project.

The talented designer’s stunning designs have been worn by Hollywood celebrities like Miley Cyrus and reality star Kylie Jenner. Now, Magugu has collaborated with Dior, one of the most popular fashion houses in the world, on a limited edition collection.

WWD reports that the collection will feature t-shirts, skirts, scarves, boots and more. Speaking on his relationship with head of Dior, Maria Graziee Chiuri, the 29-year-old designer said the two met when he was the finalist for the 2019 LVMH Prize for Young Fashion Designers.

“She was the one to really put me at ease. I think she even asked the first question to gently ease me into it,” he recalled.

WHY DID DIOR CHOOSE THEBE MAGUGU?

Chiuri explained every item of Magugu’s collection was created by Dior, except for the t-shirt, which was made by a South African manufacturer.

“The result is an outfit demonstrating the variety of skilled artisanal techniques around the world. It resonates with this global understanding of fashion craftsmanship that I am very attached to,” she said.

“I thought it was natural to think of a project which also gave visibility to this young generation of designer. It felt like a more meaningful way to envision our collaboration.”

Taking to Twitter, tweeps praised the South African designer for his limited edition with Dior.

“Thebe Magugu is on another level, love this,” wrote one tweep.

“Every time I hear good news about Thebe Magugu my heart smiles. He deserves everything,” wrote another tweep.

“Thebe Magugu had an amazing year.”