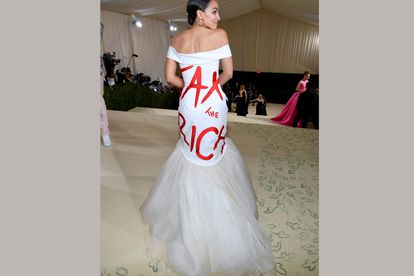 The dress AOC wore to the Met Gala reads ‘tax the rich’. Image via Twitter @franifio.

The dress AOC wore to the Met Gala reads ‘tax the rich’. Image via Twitter @franifio.

American politician and activist Alexandria Ocasio-Cortez, popularly known by her initials AOC, made a political statement through fashion at the 2021 Met Gala, held on Monday 13 September in New York.

AOC made her Met Gala debut this year and took the moment to make a political statement through her dress. She wore a white gown by Brother Vellies with “tax the rich” written in red across the dress.

The dress was paired with red shoes from Brother Vellies with long laces and bright flowers along the heel. Her handbag also read “tax the rich”.

The politician spent the night surrounded by some of the most powerful and famous people in the world and thought it was fitting to let them know they need to be taxed.

PHOTOS OF THE DRESS

THE ‘MEDIUM IS THE MESSAGE’ SAYS AOC

AOC, who adds her name to list of politicians that have attend the Met Gala, says that the medium is the message.

“The medium is the message.Proud to work with @aurorajames as a sustainably focused, Black woman immigrant designer who went from starting her dream @brothervellies at a flea market in Brooklyn to winning the @cfda against all odds – and then work together to kick open the doors at the Met,” wrote AOC on Instagram.

“And yes, BEFORE anybody starts wilding out – NYC elected officials are regularly invited to and attend the Met due to our responsibilities in overseeing our city’s cultural institutions that serve the public. I was one of several in attendance,” she continued.

The founder and creative director of Brother Vellies, Aurora James said that both fashion and America is changing and AOC was an embodiment of the language that fashion needs.

“We can never get too comfortable in our seats at the table once they’ve been given,” said Aurora James to Vogue.

“We must always continue to push ourselves, push our colleagues, push the culture and push the country forward. Fashion is changing, America is changing. And as far as this theme goes, I think Alexandria and I are a great embodiment of the language fashion needs to consider adding to the general lexicon as we work towards a more sustainable, inclusive, and empowered future,” she continued.