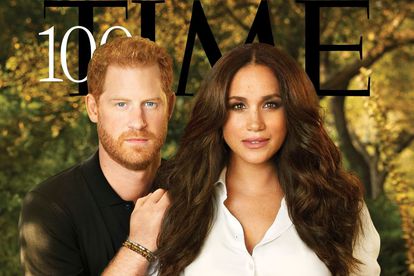 Meghan Markle and her husband Prince Harry have made the cover of Time Magazine’s 100 Most Influential People of 2021 list.. but all eyes are on the leading lady.

The mom of two commands attention with her striking poses and sophisticated looks in three images captured by the publication.

Meghan may have even taken a page out of her role as boss babe Rachel Zane from TV show Suits.

In the cover photo, the brunette beauty is pictured standing in front of her husband, her eyes wide open and her legs standing apart whilst she grasps her hands together.

“It’s meaningful a photo that puts him behind her and shows her as a powerful woman,” one commenter wrote on TIME’s Instagram page.

And her all white look is likely an homage to the suffragette movement, claims fashion writer Bella Gerard.

She wrote in a Yahoo Lifestyle column: “The suffragettes often wore white when fighting for gender equality and we frequently see women in power opt for all-white attire during pivotal moments. Think AOC when she was sworn into Congress, or Vice President Kamala Harris on election night.”

Meghan accessorising her look with gold jewellry – including a Cartier watch which once belonged to her mother-in-law Princess Diana.

The star is also seen wearing a number of rings – including a the Duet Pinky Ring from designer Shiffon which holds a special significance. The ring – designed by former Harvard student Shilpa Yarlagadda – represents a “pinky promise to pay it forward to support women.”

Half of the profits made from the pinky ring also go toward sowing”seed grants for female entrepreneurs.”

He told Femail: “It gives me Beyoncé vibes showing us girl power – backed up by her man, her prince leaning on her showcasing the female empowerment, she’s wearing the trousers with her big hair,” he said.