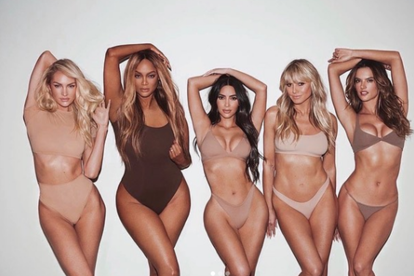 Kim Kardashian is known for her iconic campaigns. And, when it comes to her own, she pulls out all the stops.

For her Sims “Fits Everybody” line, the reality star and business mogul roped in the good looks of no less than four supermodels, which includes South Africa’s very own Candice Swanepoel.

Kim K — who shot to fame in the reality TV series Keeping Up With The Kardashians — will be in action again in the new series, The Kardashians, which premieres on Hulu on 14 April.

The new faces for the lingerie and shapewear brand are none other than model royalty Heidi Klum, Alessandra Ambrosio, Candice Swanepoel and Tyra Banks.

“It doesn’t get more iconic than this,” The Skims social media posts read.

According to MailOnline, Kardashian selected all the models to star in the campaign as it showcases the “models’ strength, energy, and everlasting allure with imagery that reflects the group’s enduring legacies”.

Of course, Kim K could not resist the opportunity to pose along with the models for a few shots.

“OK, so I wasn’t supposed to be in this @SKIMS campaign but I stopped by and jumped in because it was too iconic,” she posted on Instagram.

The reality TV star, along with Klum, Swanepoel, Ambrosia and Banks, can be seen in lingerie from the brand’s latest range.

“When @KimKardashian called me with the idea to reunite these incredible women and me for @SKIMS, I was intrigued. And here we are! I hadn’t modeled lingerie and undergarments since I retired from the runway, but it was like riding a bike. The poses came back even fiercer than before!” Tyra Banks posted on Instagram after the shoot.

“What a blast it was shooting with @tyrabanks @alessandraambrosio and @candiceswanepoel for the new @skims “Fits Everybody collection.” It has been a while since we were all together so it was so special to be reunited. Thank you @kimkardashian for making it happen,” Heid Klum echoed.

“The posse you never knew you needed…????,” posted the youngest of the group, Candice Swanepoel.

Other top models who have worked for Skims, include Kate Moss, who was one of the most famous faces of the 1990s thanks to her work with Calvin Klein, reports MailOnline.

Since starting the Skims line, Kardashian has built the brand into a billion-dollar empire. Forbes reported in January this year that the company is valued at $3.2 billion (about R46.4 billion).

According to MailOnline, Kim K is currently looking into how working in the Metaverse — a virtual-reality space in which users interact within a computer-generated environment — could help her brand.

“The Metaverse is so fascinating, especially as someone who has navigated the digital world for a long time! I’m always looking for new, exciting ways to work, so I definitely think the Metaverse is something to keep an eye on,” she reportedly said.