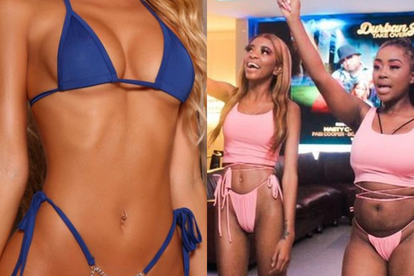 Seems like the bikini is one garment that ruffles quite a few feathers in some situations. Images via Instagram: @fashionnova/eGagasini

Seems like the bikini is one garment that ruffles quite a few feathers in some situations. Images via Instagram: @fashionnova/eGagasini

Social media users have been rubbed the wrong way by a pair of bikini bottoms which they say is way too revealing. The naughty knickers are being sold by online retailer Fashion Nova which seems to have a knack for ruffling feathers with the kinds of clothes they sell.

The undies, which like many clothing items these days, leave almost nothing to the imagination and have been duped as highly inappropriate – even as beachwear.

Bikini bottoms ruffle quite a bit of feathers

Bikinis don’t consist of much material and that’s a fact.

One Fashion Nova bikini may however be taking things a little too far with its skimpy design – or at least that’s what social media users say.

The swimwear, which is being sold online by the fashion giant is called Butterfly Babe Thong 2-piece bikini and retails at $11.99 (R200).

Taking to Instagram over the weekend, Fashion Nova shared a snap of a model in a bikini and captioned it:

“Well, This Will Leave An Interesting Tan Mark. ⁠Our Bikini Will Have Everyone Feeling A Little Extra Hot This Summer.”

While the bikini bra didn’t get any attention, the bottoms certainly left jaws dropped.

ALSO READ: Less is more: Are bridal bikinis the future of summer weddings?

Angry comments are made

It appears not many women would like to find themselves wearing the raunchy swimwear at a public beach or pool any time soon.

Many people remarked that they may get arrested for indecent exposure if they decided to wear the bikini.

“What is with this style?!? May as well be naked,” one person commented.

“Imagine our fathers seeing us in this!”

Of course, there were a few women who loved the bikini and remarked that they would definitely be adding it to their wardrobes.

Earlier this week, a Durban joint also came under criticism for making their servers wear bikinis.

Snaps of the young ladies in their bright orange barely-there swimsuits have been highly circulated online and have divided the country’s opinion over the issue of overly sexualising young women’s bodies.

One can only imagine the outrage they would have caused if they were wearing this risque Fashion Nova set.