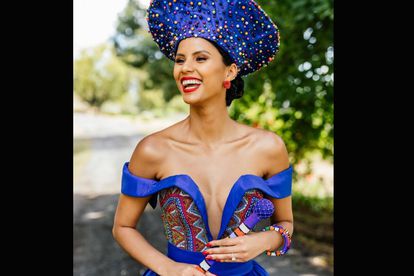 The first outfit was a red gown by fashion brand Natalia Jeffreys. The second outfit was a beautiful bright blue traditional dress, which she credited to Scalo.

However, Bayanda Khathini, who specialises in traditional wear, sent a letter of demand to Scalo claiming that his work has been copied.

THE LETTER OF DEMAND

In an Instagram post that has since been deleted, Bayanda Khathini shared the letter of demand his lawyers sent to Sello Medupe of Scalo. The letter of demand states that Khathini is the creator of the dress and he has the right to copyright protection.

“Our client discovered this design infringement when former Miss SA, Tamaryn Green, appeared on social media for her umembeso ceremony. As the creator of his (work), our client has a right to copyright protection of which he does not need to register,” read an extract from the letter of demand.

“The protection arises automatically as his work is original and is recorded in a material form,” continued the letter.

The letter also demanded that Scalo remove pictures of Tamaryn’s dress from his Instagram account and any other social media platform that the dress was posted to.

It seems Khathini may have removed the letter of demand from Instagram after his followers thought he was in the wrong.

“Maybe the client came with a picture of your dress as an inspiration. But we can’t now say all designers in SA can’t have evening gowns with beadwork bodice because that’s your standard design. Anyway, let’s trust the legal system for a fair ruling,” the Instagrammer continued.

Another Instagrammer thought Khathini was “stretching” it.

“Love your work … however, you are really stretching it to think or state you originated this style of beaded gowns. good luck with your legal demands – one can draw an entire archive of similar styled/created works preceding your birth … so really,” commented another Instagrammer.