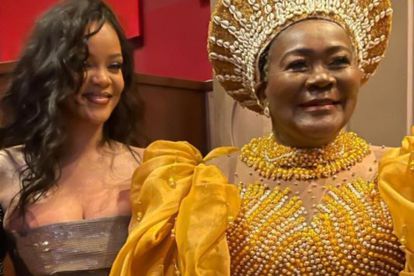 South African star Connie Chiume poses with Rihanna at the world premiere of ‘Black Panther: Wakanda Forever’ at the Dolby Theatre in Hollywood on Wednesday 26 October. Image via Instagram @conniechiume

South African star Connie Chiume poses with Rihanna at the world premiere of ‘Black Panther: Wakanda Forever’ at the Dolby Theatre in Hollywood on Wednesday 26 October. Image via Instagram @conniechiume

South Africa’s very own Connie Chiume lit up the purple carpet like a true sun goddess at Marvel Studios’ Black Panther: Wakanda Forever premiere at the Dolby Theatre in Hollywood on Wednesday evening.

The purple carpet, representing the royal dynasty of Wakanda, was graced by industry A-listers who stepped out in style for the long-awaited sequel. Black Panther: Wakanda Forever is coming to cinemas in South Africa on 11 November 2022.

Veteran actress and Gomora star Chiume gave Mzansi an inside look of all the glitz and glamour on her Instagram Live before the screening started. Fans couldn’t stop gushing over her gold beaded gown and regal headdress by local designer Sello Medupe’s fashion house Scalo.

‘The whole outfit is a moment’

Take a look at some of the comments:

@sinkingslowly87: “She is stunning! That gown is absolutely gorgeous, and the headpiece is as well. A beautiful look.”

@virgobbaby: “The whole outfit is a moment.”

@iam_alvin__: “I’m glad to say I grew up watching this woman on Rhythm City. I cried when her character died on the show.”

Tweeps also enjoyed a clip of Chiume rubbing shoulders with Rihanna and rapper boyfriend A$AP Rocky. The premiere was the first time the star couple hit the “red” carpet since the birth of their baby boy back in May.

In Wakanda Forever, Chiume reprises her Black Panther role as a mining tribe elder for Wakanda Forever. According to Savanna News, the 70-year-old actress’s children accompanied her on her trip to California.

The big talk of the night was Rihanna’s new song, Lift Me Up, which is the lead single in the film. The song — which has been released on Friday 28 October — is a tribute to the life and legacy of Black Panther star Chadwick Boseman, who died in August 2020 of colon cancer.

Lift Me Up marks the 34-year-old singer’s highly anticipated return to music since she stepped away six years ago to launch high-fashion collections, a lingerie line, a makeup brand, becoming a billionaire…and having a baby!

The world premiere of the Black Panther sequel was a star-studded affair with cast members and other industry players in attendance putting their best foot forward on the purple carpet.

Lupita Nyong’o stunned in  tin a custom-made co-ord by Balmain and De Beers. The actress wore nearly 55 carats worth of diamonds from De Beers Jewellers: One of her bracelets alone was 12.02 carats, according to Cosmopolitan.

Are the rumours true? Will Regé-Jean Page star in the sequel? The Bridgerton star attended the world premiere in a light gray suit styled with a white button-up shirt and white sneakers.

Danai Gurira brought all the drama to the Black Panther: Wakanda Forever purple carpet in a purple Robert Wun dress.

Michael B Jordan made a solid sartorial statement in a mustard yellow Louis Vuitton suit. He also wore a yellow gold Vacheron Constantin watch to complement the look.

Michaela Coel, who plays Aneka, a queer combat instructor and captain in the film, wore a custom ensemble by Ferragamo.

Her outfit, designed by the Italian house’s newly-appointed creative director Maximilian Davis, comprised a dark brown crystal-embellished, floor-length gown with a train and matching hood, sheer opera gloves and black sandals. The look was finished with a statement black bag with exaggerated tassels and a diamond ring by Thelma West.

Ryan Coogler and his wife, Zinzi Evans, radiated in their all-white ensembles. The necklace Ryan is wearing contains a photo of Chadwick Boseman.

The Queen Mother herself, Angela Bassett, looked regal in a strapless three-tier gown made of a metallic fuschia fabric.