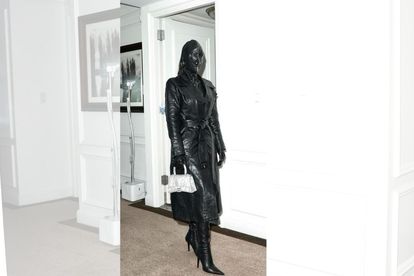 Sergio Castaño Peña took to social media to reveal that the luxury label’s creative director Demna Gvasalia exploited his work and even failed to credit him for a look seen on the reality TV star last week.

‘I WAS AN ILLEGALLY UNDERPAID INTERN’

Sergio revealed on his Instagram Stories that Kim Kardashian’s Balenciaga look she wore at New York Fashion Week last week was in actual fact, designed by him in 2019.

The 25-year-old designer was a former intern at luxury fashion company Vetements founded by Demna and his brother Guram Gvasalia.

He wrote alongside a picture of Kim wearing the design: “I would like everyone to know today, this look I made back in 2019, serving Vetements as an illegally unpaid intern working 12 hours a day”.

Sergio also posted pictures of his face mask, of which he created a prototype.

“These are some of the prototypes I experimented with in order to achieve the look. Which was developed in Corte, an Italian supplier”.

Sergio then posted a picture of himself, with the caption: “Thinking of my 3 days non-sleeping journeys at Paris Fashion Week for less than 1000 Francs per month. Minimum salary in Switzerland by the time was 4500 Francs”.

And finally the designer – whose work has been worn by stars like Iggy Azalea and Tommy Cash – showed off the completed design, which bears a striking resemblance to the one worn by Kim herself.

BALENCIAGA ACCUSED OF PLAGIARISM OVER THE YEARS

It’s not the first time Balenciaga or Demna have been accused of plagiarism – in 2018, the fashion house was accused of stealing a handbag design from City Merchandise, a souvenir company.

And in 2020, Demna – who left his position at Vetements a year prior –  was accused of copying a T-shirt design by the label.