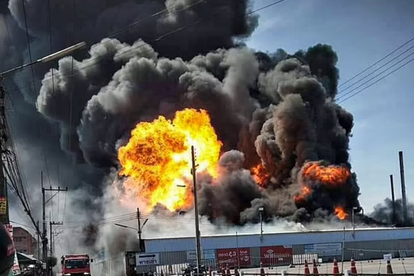 A warehouse employee set the place alight after her bossed stressed her out. Image via Viral Press

A warehouse employee set the place alight after her bossed stressed her out. Image via Viral Press

38-year-old Ann Sriya allegedly blew up the oil warehouse where she worked because she was angry at her boss. Reports reveal that Ann set a piece of paper alight before throwing it on top of a fuel container. She was arrested after she confessed the crime to the police.

Disgruntled employee sets warehouse alight after boss stressed her out

Ann Sriya has just been arrested and charged with arson after she decided to set her workplace alight. Ann – an employee of Prapakorn Oil warehouse in Thailand – set the place on fire using a piece of paper.

She later confessed to the police and explained that she had done it because she was fed up. According to her, her boss Pipat Ungprapakorn, 65 always complaining and stressing her out.

Daily Mail reports that CCTV footage captured the former head of the warehouse walking into the building with what appeared a piece of paper.

Another clip shows the flames started flickering on top of a container in the warehouse, which stores thousands of liters of oil tanks.

The publication reports that the blazing fire caused £900,000 (over R19 million) worth of damage due to the highly flammable oil. It reportedly took 40 fire engines and over four hours to put the fire out.

More than ten houses near the warehouse were also destroyed while one villager suffered burns on her arm but is doing fine now.

“This is the second time a fire has started from this factory. The woman has been working for Prapakorn Oil for nine years.

“She said her employer complained to her and caused her stress every day, and she did not expect the fire she started to cause this level of damage.”

ALSO READ: Portugal makes it illegal for bosses to text employees after hours