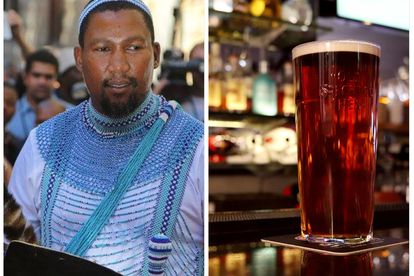 Mandla Mandela has called for a ban on alcohol sales in community taverns in the wake of the Enyobeni tavern tragedy on Sunday.
Image via Facebook Mandla Mandela/Pixabay

Mandla Mandela has called for a ban on alcohol sales in community taverns in the wake of the Enyobeni tavern tragedy on Sunday.
Image via Facebook Mandla Mandela/Pixabay

Mandla Mandela has called for a total ban on alcohol – in community taverns at least – following the death of 21 children at the Enyobeni tavern in East London.

Twelve boys and nine girls – with the youngest being just 13 years old – died after a night out. According to reports, the children were celebrating a “pens down” party and the start of the winter school holidays.

Sharing a statement on the Enyobeni massacre, the Mvezo traditional council chief called on alcohol sales in communities to be banned with immediate effect.

He shared: “It’s time for a total ban on alcohol in our communities. Enyobeni tavern is not an isolated case! It calls for more decisive action in order to save lives and prevent a repeat of this unfortunate tragedy”.

ALSO READ: ‘It ended in tears for others’: Tweeps praise mom after Enyobeni tragedy

Mandla outlined a number of cases where underage drinking had resulted in rape, murder, and even gender-based violence (GBV).

Mandla took into account that this would have a ripple effect on the economy of small communities. He added: “This call is not made lightly as the industry always justifies their operations by citing job losses, losses to secondary economic activities, and its impact on community livelihoods. We say that such justification is farcical in the light of the innocent lives lost in the Enyobeni tavern tragedy and other such incidents.

“It’s time we put an end to those who kill our children and who profiteer from [their] lives”.

Meanwhile, youth advocacy group LoveLife has called for the owner of Enyobeni to face the harshest punishment by law.

LoveLife CEO Dr. Linda Ncube-Nkomo called on authorities to prosecute owner Vuyokazi Ndevu, who claims he was “not present” during the incident.

Speaking to a statement, she said: “This will send a strong message to those that similarly breach the conditions of their operating licences that are clear about not selling alcohol to children under the age of 18.”

Ncube-Nkomo also claimed that parents should have been aware of their children’s whereabouts.

“Enyobeni tavern is in a residential area. Therefore it is reasonable to believe that residents would have been aware of the underage drinking [on] their doorstep. For incidents like these to stop occurring, we need to actively call and involve law enforcement agencies when the law is being broken right under our noses.

“We call on South Africans to blow the whistle on crime affecting our youth. An incident like this one is one too many, and should never be allowed to happen again.”

Addressing the scourge of underage drinking, the LoveLife advocate called for education about the dangers of alcohol abuse.

She added: “Underage drinking is a looming crisis that requires everyone in society to play their part. Those charged with the responsibility to protect the children must be held accountable when in breach of their duties.”