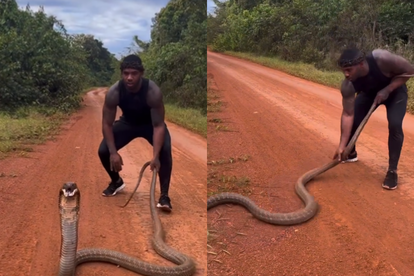 This man makes playing with a snake look easy. Image via Twitter @shannonsharpee.

This man makes playing with a snake look easy. Image via Twitter @shannonsharpee.

When it comes to bravery, some people have simply been blessed with a lot more of it than others. While many of us squirm at the sight of a tiny worm, one man has gained himself a reputation for taking on some of the world’s scariest animals. In a new video that has gone viral on Twitter, the brave man can be seen manhandling a giant king cobra snake, and honestly, it is quite thrilling to watch.

The clip has sparked a number of reactions from social media users who mocked his bravery or wondered how he is able to handle such a big snake in that manner.

Not many people are snake lovers, in fact, here in South Africa, people dislike snakes so much that many believe the animals to be tied to some sort of witchcraft.

This must be why this man has caught the attention of many after @shannonsharpee shared a video of him fearlessly manhandling a large king cobra.

In the clip that was posted on Twitter on 11 August, the brave man who calls himself @therealtarzann, can be seen lifting the snake and pulling it around by its tail.

The hair-raising video was captioned:

The clip sparked a number of reactions from Twitter users who certainly can’t understand why someone would even dare play with a snake.

“Damn imagine f*cking with a king cobra just to get some internet points smh.”

“Notice how it never Flared its hood? Cuz It’s a captive-bred animal that’s overfed. Prolly used to some handling when cleaning the enclosure. It’s too large. Probably defanged too. It’s a common practice to do that in the illegal animal trade. In the wild, this would be impossible.”

ALSO READ: ‘It needs to eat’: Mixed feelings over clip of motorist saving deer from snake