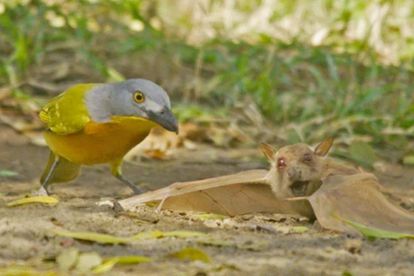 A grey-headed bushshrike attacked a fruit bat that fell to the ground in the Kruger. Image: YouTube/LatestSightings

A grey-headed bushshrike attacked a fruit bat that fell to the ground in the Kruger. Image: YouTube/LatestSightings

This takes “pick on someone your own size” to a new level! A fruit bat found itself in a less than ideal situation when an opportunistic and aggressive bushshrike tried to make a meal out of it.

Latest Sightings shared the details of this unique sighting, stating that the sighting was captured by wildlife filmmaker, Brent Leo-Smith, while sitting in his garden in Pridelands Conservancy, Balule Game Reserve in the Greater Kruger.

Also Read: Saved by the tree! Leopard cub runs for its life from hyena

It is reported that this is also not the first time we’ve seen an interesting interaction between a grey-headed bushshrike and another obscure creature.

“The Painteddog TV team heard bird alarm calls in the garden so we went to see what the commotion was about.”

Upon inspection, a fruit bat had flown down onto the floor and a very ambitious bushshrike spent a few minutes attacking and pecking at the fruit bat.

“The fruit bat was not in an ideal position as they struggle to take flight from the ground but with a little determination, the shaky fruit bat was able to escape and fly back into the safety of tree.

“By hanging upside down, they are able to easily launch themselves into flight if they need to escape.”

The video is clocking in thousands of views, with many feeling sorry for the bat.

“I mean…. ‘battle it out’ is definitely one way to put it. Something like ‘bird beats up bat’ might be more accurate, though. The shrike had every advantage, to kind of a shocking extent. I never realized bats were quite that helpless on the ground,” said another.