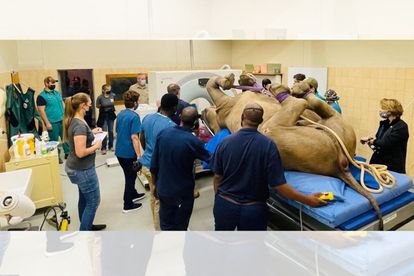 It has been a great day for veterinary healthcare and diagnostic imaging as well as rhino conservation, after the first-ever successful live CT scan on a rhino in South Africa.

Care for Wild Rhino Sanctuary and the University of Pretoria’s Faculty of Veterinary Science in Onderstepoort celebrated the milestone in October 2021.

Care For Wild Rhino Sanctuary is one of the largest rhino sanctuaries in the world and was irresponsible for the rehabilitation of the white rhino named Oz after the gentle giant was orphaned by poachers in 2015. But, earlier this year, Rhino Monitors reported an unusual swelling to Oz’s face, according to a short statement released to the public.

Care for Wild Founder and CEO, Petronel Nieuwoudt consulted with a veterinarian, Dr Albertus Coetzee of West Acres Animal Hospital. After discussions with wildlife veterinarian Dr Jacques O’Dell and Prof Gerhard Steenkamp, veterinary dentistry specialist and maxillofacial surgeon at the Faculty of Veterinary Science, and with the support of Louis van Wyk of Wildlifevets.com, the decision was made to transport the one-tonne bull to the Onderstepoort Veterinary Academic Hospital (OVAH) for further investigation.

“The collaboration catalysed a landmark moment in veterinary healthcare as well as rhino care and rehabilitation with the first-ever CT scan on a live rhino in South Africa,” the statement reads. “The logistical experience, information and knowledge gained from this is phenomenal progress in the fight to save a keystone species from extinction.”

Nieuwoudt also said that they cannot save a species alone.

“But together we can achieve remarkable things. In acknowledgement of the team of specialists who came together, we thank them for their passion, dedication and immense commitment.”

The CT scan revealed a tooth root abscess and appropriate treatment was performed.

Oz is now back at Care for Wild with his rhino crash and eating and drinking well.

You can scroll through the photos of the CT scan down below:

A post shared by Care For Wild Rhino Sanctuary (@careforwild)