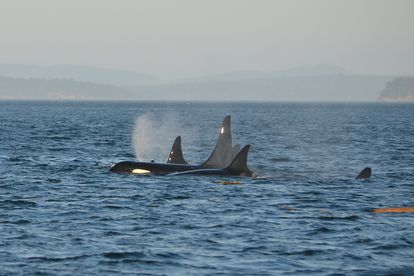 The KZN South Coast is known for its sightings of humpback and southern right whales, and of recently, pods of orcas.

As of recently, in what is labelled an unusual sighting by IOL, fisherman Rustin Naidoo spotted two pods of orca whales.

Orcas are popularly known as the “killer whale” belonging to the oceanic dolphin family, of which it is the largest member. It is recognizable by its black-and-white patterned body.

On Tuesday morning, 26 October, Naidoo and his crew spotted the first pod of around six orcas while on his commercial fishing boat, Lucky Lady, about 3km offshore on the deeper line of the Aliwal Shoal.

The team also spotted another pod, this time with around 15 to 20 orcas. The sightings were just 1km kilometre apart.

“I’ve only seen orcas once before when I was fishing on my dad’s boat as a youngster,” Naidoo, who hails from a long line of sardine seine netters, said. “I’m at sea daily and haven’t seen anything quite like this since. It was really beautiful. They were just cruising and playing in our wake.”

Naidoo knows a thing or two about the seas, as he has been fishing since he was four years old.

“The cooler sea temperatures could account for the orcas’ appearance, and that they’re often known to settle in an area for a while, giving visitors to the South Coast a rare opportunity to spot this incredible marine animal,” he said.