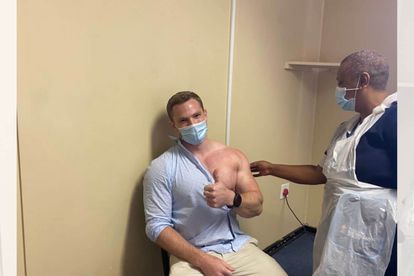 A doctor from the Eastern Cape caused a stir on social media when the South African government posted a photo of him receiving the vaccine on Twitter.

The photos come after the vaccine roll-out kicked off earlier in February, with Health Minister Zweli Mkhize saying that 15 388 healthcare workers have been vaccinated in the country since the 80 000 Johnson & Johnson doses arrived in South Africa last week.

The images were captioned: “Nelson Mandela Bay District vaccine rollout is in full swing, health workers are excited to receive their doses of the coronavirus Johnson & Johnson Vaccine at Livingstone Hospital in Nelson Mandela Bay.”

According to IOL, Twitter folk were quick to focus on one eye-catching image:

Now, many on social media are looking for the “doctor in frame one” to give them the jab:

“Oh wow! Please tell me where he works … I’m applying as his receptionist. Imagine looking at that every day,“ another user commented on Facebook.

“If he personally administers the vaccine, I’ll take two please.”

“I need to know who this doctor is…. for research purposes…” said another.

Dr Woodford, who was previously infected with COVID-19, spoke about the experience to GCIS and said that he was glad that he could get the vaccine and do his part in helping to stop the spread of COVID-19.

“Seeing so many of my colleagues, as well as our patients, get sick with it (is tough) … It’s also really difficult each time one of us gets COVID-19 then we’re severely staff depleted.”

After his injection, he said: “I’m feeling good, I don’t like needles, I just looked away, and didn’t feel too much. I’m glad it’s done, and hopefully, this means I protect myself and those around me.”

He said later on social media that the injection itself wasn’t bad as “it’s very little that is injected” and that a Voltaren injection he got before was more painful.

It looks like South Africans like to amuse each other on social media. At the end of last year, Boerboel Wear, a proudly South African camo and outdoor clothing brand, recently caused a stir on social media when they posted a somewhat raunchy advertisement promoting their new denim Kalahari shirt.