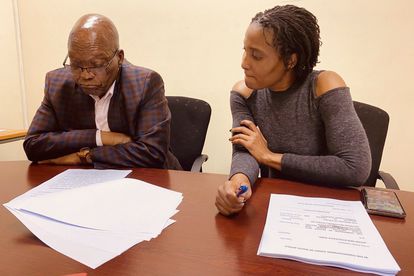 Duduzile Zuma has once again taken to Twitter. This time she wasn’t showering her father with love. Instead, she was offering South Africa’s ailing power utility Eskom some advice. In a controversial post, Zuma’s devoted daughter shared who she thought would be best to manage the embattled state-owned enterprise.

Duduzile Zuma, the daughter of former president Jacob Zuma is probably the most outspoken of the Zuma family. When the young lady isn’t sharing posts about her dad and his problematic political life, she is adding her two cents on matters that affect South Africa.

The outspoken woman headed to Twitter on Thursday where she offered Mzansi some advice about the load shedding crisis that Eskom is subjecting the country to. According to Dudu, Koko Matshela and former Eskom boss Brian Molefe can help the power company back to its former glory.

While Dudu was probably just offering her thoughts on the troublesome matter, South Africans were not having it. Many of them headed to the comment section of her post where they criticised her and the rest of the Zumas. Read a few of their comments below:

“That’s not Black Excellence. Those comrades lining their pockets. That’s ur father’s style. Remember Eskom was one of the leading power suppliers in the world (80s early 90), under this black management they were riddled with load shedding and corruption.”

“Looting Excellence, your father was in on it, it’s a pity the current president has to deal with it like it’s all his fault, the number of households and households utilities have been rising every year whilst your black excellency was not investing any, in power stations to meet them.”

ZUMA FANS TO THE RESCUE

Not everyone is jumping down Dudu’s throat, though. A lot of Zuma fans were also in the comment section siding with her about her thoughts on Eskom’s situation:

“During their time at ESKOM, we didn’t experience all these harsh conditions. It proved beyond reasonable doubt that they had all the required qualities to lead ESKOM. Jealous accompanied by politics aside””

“My deepest condolences about the loss in your family. Stand strong, real black people are fully behind ubaba. Forgive the stoogies, they’re getting paid, times are hard”