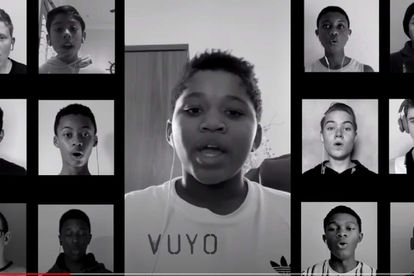 The Drakensberg Boys Choir recently recorded and shared their version of the hit-song, Smile.

After presenting their chamber choir, the Drakensberg Boys Choir from KwaZulu-Natal said on YouTube that they are delighted to share this a capella version of the classic song by Charlie Chaplin that was ultimately arranged by Ben Bram.

“This is the second song which was produced in its entirety during our national lockdown with the boys at their homes. We thought this song perfectly captures the spirit of our human response to the pandemic, full of melancholy, yet extremely hopeful and positive.”

The Drakensberg Boys Choir initially shared a message of hope with their performance of South African composer Lebo M’s Solibona (We will see the sun rise again).

Now they can be heard singing:

“Smile though your heart is aching, Smile even though it’s breaking, When there are clouds in the sky you’ll get by, If you smile through your fear and sorrow, Smile and maybe tomorrow you’ll see the sun come shining through for you…”

Behind the song Smile

While the song Smile was written and performed by Chaplin in the 1936 movie Modern Times, it was later made (more) popular when Nat King Cole recorded it in 1954. The song was also originally written as an instrumental by Chaplin himself but two lyricists named John Turner and Geoffrey Parsons added lyrics to it.

Even Michael Jackson was reportedly a huge fan of the song and recorded a version of it on his 1995 album HIStory. Jermaine Jackson also went on to perform the song at Michael’s memorial in 2009.

Unsurprisingly, Michael is not the only fan of the song, as it has been covered by an eclectic batch of performers including Elvis Costello, Michael Bolton, Michael Bublé, Barbara Streisand, Josh Groban and of course now the Drakensberg Boys Choir.