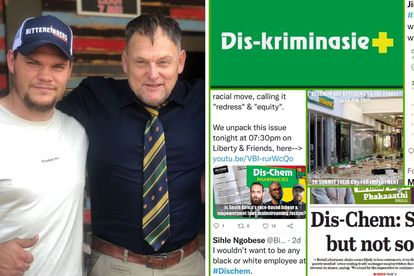 Steve Hofmeyr and his son Devon are calling on their followers to boycott Dis-Chem.
Image via Facebook
@steve.hofmeyr

Steve Hofmeyr and his son Devon are calling on their followers to boycott Dis-Chem.
Image via Facebook
@steve.hofmeyr

Days after vowing to support his “local pharmacy business”, Steve Hofmeyr has continued his social media criticism of Dis-Chem and its pledge to support South African BEE policies.

In it, the nationwide pharmacy group revealed that they were placing a “moratorium” on hiring white individuals. This was due to them keeping with labour legislation.

Following a widespread backlash, Dis-Chem has since apologised for its “tone and wording”, but not for its stance.

Earlier this week, Steve Hofmeyr called out Dis-Chem over the memo which went viral.

And like fellow South Africans, Steve vowed to boycott the chain stores in favour of his local family-owned business.

But the controversial entertainer was not done yet. In a loaded tweet posted on Friday 21 October, Steve slammed BEE policies, employment equality, and land and reparations.

He posted: “Your tribe has zero claims on the past if your ancestors espoused the same code of ethics during the Age of Conquest as your conquerors. Especially if you did to others what was done to you. Reparations, AA, BEE, EE, and quotas are the policies of bad losers.

On Facebook, Steve Hofmeyr appeared to mobilise his followers to support a boycott of Dis-Chem…and its competitor Clicks.

She shared: “I am 100% on board a Dischem boycott. But don’t think I think my pills at Clicks are a more ethical offer.

“Have you forgotten how high they jumped for the EFF over one innocent shampoo advert? I wonder what businesses out there are not subject to the same SEB rating as Dis-Chem? But it’s our job as victims of race politics IN THE 21ST EU (unbelievable) to proactively combat it”.

And Steve’s comments were echoed by his son Devon Hofmeyr’s stance on a Dis-Chem boycott.

“And even if we don’t have the money we want, we have the choice to do with what we have. We have the POWER to turn the taps on those that consider us second-hand citizens of this country.

“If our money is good enough but our white skin is not, we take our skin and our money and we walk”.

DIS-CHEM GETS THUMBS UP FROM DEPARTMENT OF LABOUR

Whilst scores of South Africans have threatened to boycott Dis-Chem, and amid legal action by trade union Solidarity over their memo, the group has received support from the Depart of Labour’s Commission for Employment Equity (CEE), which said its transformation plan was compliant.

CEE chairperson Tabea Kabinde said of Dis-Chem in a statement: “We should also concede that the elimination of unfair discrimination alone will not remedy this. But policies, programmes and other positive actions such as affirmative action, which are designed to redress the imbalances of the past are therefore needed”.

Earlier this week, Dis-Chem set the record straight on the leaked letter and the outrage that ensued.

It said in a statement to News24: “Dis-Chem stands by the unequivocal imperative to continue its transformation journey. Equality and diversity are important to Dis-Chem. The group continues to make great strides in ensuring it maintains progress in this area.

“It is a proudly South African business which promotes inclusivity and representation of all South Africans in their capacity as key stakeholders”.