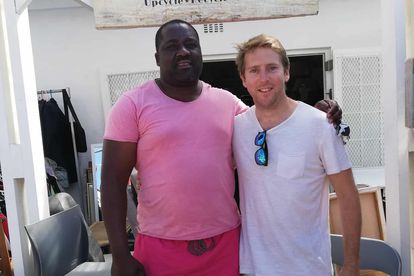 Hout Bay resident Sheehama Onesmus, 42, fell victim to crime on 21 October when his truck was stolen from outside his house. The remains were later found, “burned to a crisp” in Gugulethu.

Onesmus is an entrepreneur who started Sky Transport – a small transport business – back in 2016, and the truck was his family’s livelihood.

When Pierre De Wet from Anything Goes Furniture heard that Onesmus’ truck was stolen, stripped of parts and burned out, he immediately sprang into a action and created a BackaBuddy campaign for his friend.

A hardworking entrepreneur and family man

De Wet explained that Onesmus is “more than just the guy with the truck who moves furniture,” and added:

“He has become my friend. This week his livelihood was stripped from him when his truck was stolen, and with it went his business and means of looking after his family.”

According to De Wet, Onesmus “has never asked for anything,” but has worked hard over the years to foster an entrepreneurial spirit. De Wet also highlighted the importance of supporting small businesses, even more so when they are crippled by crime.

How did the community respond?

The support has been overwhelming, and Onesmus’ business is growing in the process. One of his backers, Vicci Butler, submitted the following note with her donation:

“When you have your new truck please contact me to move some furniture!”

A user known only as Goosen said they supported the campaign 100 per cent and backed that statement up by donating R1 500. While some of the donations range from R100 to R500, one family gave a whopping R10 282.

Donations to Onesmus and Sky Transport can be made on the BackaBuddy campaign page: Get Sheehama’s Business Back.