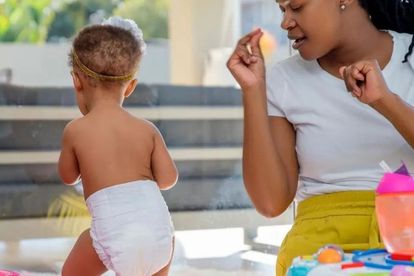 Actress Zenande Mfenyana has headed to social media to complain about the cost of baby formula.
Image via Instagram
@zenandemfenyana

Actress Zenande Mfenyana has headed to social media to complain about the cost of baby formula.
Image via Instagram
@zenandemfenyana

If you’re a parent of a baby who drinks milk formula, you’ll know just how much of a hole it burns in your pocket. And Zenande Mfenyana can relate…

The Generations soapie actress – who is mom to a baby girl – has tweeted about the costs of feeding a tiny human being.

She’s also asked South Africans to bear this in mind before they decide to start having kids of their own.

She tweeted: “I just spent 20 million on formula. If you’re planning on having a child, make sure neh?”

“Just last week I almost fell to the ground with the increase price of formula that I normally buy for my boy. And he’s only six months old.

“I spent R200 million. Mine was allergic to milk so she used to drink soy milk. Isomil costs R250 for a small tin that would last a week. So I used to buy 4 a month”

“These little people are expensive am spending R400 every week for a tin of S26 gold milk. Am not ready for another baby”

When asked why she didn’t go the breastfeeding route, Zenande responded: “That was my plan, but I ran out of breastmilk by 14months”.

Zenande Mfenyana’s tweet was a hit among her followers, who felt her pain.

She tweeted: “I’m loving the mom’s on my formula tweet, so empathetic and real. Like, they get it”.

The mom-of-one then asked Twitter parents of toddlers how they were coping, which opened another floodgate of tweets from her followers.

“Ready to take him to toddler boarding school”

“There are days when I want to skip the country. And then I remember that I’d be leaving my heart behind. And then I sit my a** right down and get terrorised by my little person”

ALSO READ: ‘This is child abuse’: Mom bizarrely gets wig installed on her baby [watch]