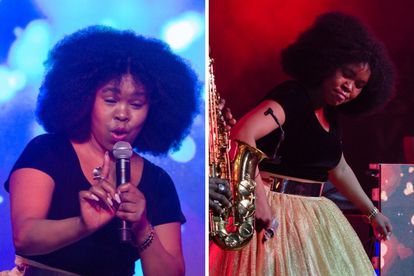 Zahara has clapped back at claims she was ‘drunk’ during a performance at the Macufe Divas concert on Friday night.
Image via Twitter
@zaharasa

Zahara has clapped back at claims she was ‘drunk’ during a performance at the Macufe Divas concert on Friday night.
Image via Twitter
@zaharasa

Zahara has clapped back at claims she was drunk during her performance at the Macufe Lifestyle Divas Show on Friday night – calling out her critics for “editing” footage of her.

On social media, clips of the singer singing out of tune and slurring her words went viral – leading many to believe she had taken to the stage whilst intoxicated.

Zahara performed at the Bloemfontein concert alongside female favourites like Makhadzi, Zonke, Lamiez Holworthy, and many more.

Following the performance, Zahara became a trending topic on Twitter with clips of her performance trending for all the wrong reasons.

And many tweeps brought up the singer’s reported history of alcohol abuse.

But Zahara quickly attempted to dispel rumours that she was drunk on stage.

She tweeted alongside a clip of her singing: “Don’t edit things to put me down, God is good all the time. Stop this nonsense”.

Unfortunately for Zahara, many tweeps found her footage “proof” that her performance was substandard.

@MbeleLetso: “You just gave us another bad clip. We love you Zahara please take this coming from a good heart & polish your craft. I have attended your concerts & trust me this is not you at all. You used to come & perform for us as a one-woman show & you killed it”

@maliyekutsenga: “No, no, no Zahara!  Can you be serious for once? Don’t abuse the fact that we love you and always support you. My friend was live there, she sent me the video. You were drunk, very drunk. Apologise and get help”

@LimthandeG: “Someone is busy with you and your career. If you don’t stop drinking immediately, you’ll end up working at Shoprite. Pull yourself together”

But this one is worse mos baby … pic.twitter.com/Ut6LTy0xZz

And the tweep who posted the original clip of Zahara, clapped back that they did not edit the video in any way.

“Why would I go out of my way to lie about you? The video I posted was from a Facebook Live, meaning that there’s no way it could have been edited. This 15-second clip still proves me right. I dare you now to tweet your whole performance!”, the tweep posted.