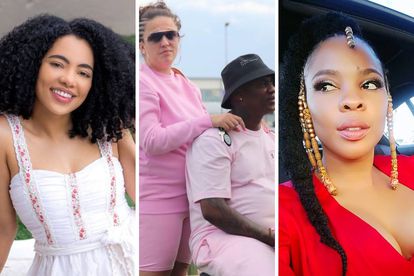 ‘Uyajola’ presenter Jub Jub has been linked to a string of women, including Amanda du Pont, ‘Kira’ and Masechaba Ndlovu.
Image via Tiwtter
@amandadupont/@musakhawula/@masechabaafrica

‘Uyajola’ presenter Jub Jub has been linked to a string of women, including Amanda du Pont, ‘Kira’ and Masechaba Ndlovu.
Image via Tiwtter
@amandadupont/@musakhawula/@masechabaafrica

Jub Jub may present a show about cheaters in Mzansi – Moja Love’s Uyajola 9/9 – but is he one himself?

According to several women that have dated him in the past, the rapper and presenter is just as guilty as the two-timers he catches red-handed.

Here’s what we know about the women linked to Jub Jub – real name Molemo Maarohanye.

According to media personality-turned government spokeswoman Masechaba Ndlovu, Jub Jub and her go way back to their childhood.

But there was nothing sweet about their romance – in a bombshell tweet last year, Masechaba alleged Jub Jub raped her in his mother’s home in Naturena.

According to an affidavit, Masechaba claims that while the couple was dating, Jub Jub took advantage of her and forcefully took her virginity.

Amanda du Pont also began dating Jub Jub. at a young age. The couple were in a relationship for three years.

However, according to shocking allegations made in December, Amanda alleges Jub Jub raped and abused her throughout their romance. She also claims that the Moja Love star cheated on her with Kelly Khumalo.

The actress is currently in the process of laying criminal charges against the Uyajola presenter.

Not long after Jub Jub split from Amanda, he began a relationship with Kelly Khumalo in 2010. Later that year the couple would welcome their son, Christian.

Jub Jub and Kelly split amid his murder (later culpable homicide) charges and sentencing.  More than a decade after their breakup, the former couple are still on tense terms with each other.

Whilst in prison, Jub Jub was linked to media personality Matsatsi Rampa. However, this ended up in tears for the Uyajola host, after Sunday World claims “notorious celebrity relationship wrecker” Edwin Sodi impregnated his girlfriend.

According to News24, two KwaZulu-Natal students: Leigh Mvubu and Czernaaz Metedad claimed they had flings with Jub Jub whilst he was dating Amanda du Pont and Kelly Khumalo.

Then there was the case of Jub Jub’s Italian girlfriend Zenith Zee Mia, who reportedly started dating the star while he was in prison.

In 2014 Jub Jub and Zenith laid separate charges with the Ombudsman against Drum magazine, which reported that the pair had been caught having sex during his stint at the Johannesburg prison.

The magazine reported that a warder discovered the couple in the sexual act, whilst the rapper was supposedly meant to be performing at a prison gig.

WHO IS JUB JUB DATING NOW?

This week, Jub Jub’s former fiancée Tumi Mthembu claims that she caught the star cheating on her with multiple women. The media executive claims that Jub Jub and her were in a relationship for 19 years!

She told City Press: “What makes me angry is that I’ve been here. I’ve been highly supportive. I’ve forgiven him for girls like Amanda [du-Pont], Kelly Khumalo, and all the others who I don’t even know. I believed that this time around, he really wanted to grow and do right.

“Even when he was in jail, I was always there. We were always stable. The last straw for me was what he did on his birthday. It became clear to me that he never loved me, but he was simply using me

To make matters worse, pictures of Jub Jub with another woman – reportedly named “Kira” have gone viral. In the pics, the woman is seen embracing Jub Jub, wearing a ring on her ring finger!

Neither Jub Jub nor the woman has yet to speak out over speculation.