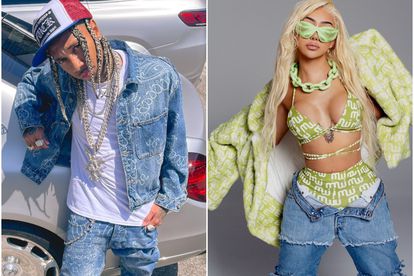 The controversial YouTuber – known for her make-up tutorials and social media rants – released a music video for her song titled Dick.

In it she alludes to romancing a number of A-listers, including Tyga. But it couldn’t be further from the truth, he says.

TYGA HITS BACK AT TRANS RUMOURS

Nikita Dragun sparked rumours of a fling with the father of one after her X-rated music video shared a screenshot of an Instagram DM from Tyga with the words “text me”. The screenshot had the rapper’s phone number blurred out.

But Tyga is now setting the record straight, claiming that his relationship with the beauty blogger is nothing more than professional.

He tweeted in response to the rumours: “My company shot and directed a music video for her a while back that never dropped .Not sure why she added my likeness to this.”

The Bored In The House hitmaker also accused Nikita of “clout chasing”.

A post shared by The Neighborhood Talk, LLC (@theneighborhoodtalk)

In 2015, Tyga was embroiled in a scandal where transgender model Mia Isabella claimed he had sent her pictures of his genitalia.

NIKITA DRAGUN UNDER FIRE FOR CALLING HERSELF A ‘CELEBRITY’

Meanwhile, Nikita Dragun has faced widespread backlash after she tweeted that “influencers are the new celebrities”.

The star’s rant was fuelled by a leaked Met Gala guest list, where influencers and social media stars were rumoured to be invited.

She added in an Instagram Live rant: “I’m so tired of this narrative of influencers not being celebrities, B**** we are. We motherf***ing are. You’re f***ing watching. I’m so heating because I see these comments not only on my posts but literally everyone if they’re doing music or whatever. It’s like b****, you guys are the ones who build us up.”