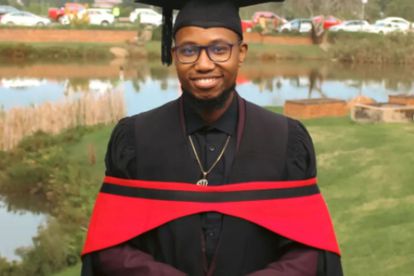 Former Scandal! actor Mbulelo Katise – who is popularly known for his role as Scelo has announced that he’s officially a graduate.

The star enrolled for a diploma in film and television at the Tshwane University of Technology in 2019 six months before leaving the soapie.

Fan-favourite Scandal! actor Mbulelo Katise has announced that he has graduated from TUT after enrolling for a diploma in film and television directing.

The star revealed in an interview with Drum Magazine that he chose to study film and television and not acting because he’s always been passionate about the creative space and always had a passion for the ‘behind the scenes’ work.

“I think one thing about me, I love art in general because I feel like it can be expressed in so many different ways like for example, I do music as well, you know, I am a rapper.”

“So I consider that also a peak of my art because I write my music and then I go and make it, I write stories, then go and shoot them, I act in stories.”

“So for me, it is all about creating, and that is what generally my main passion is.”

He’s always known from a young age like primary school that he loves writing and directing and that one day he’d direct his movies.

He used to do well in his creative papers in English and used to enjoy that part, even in high school.

“I’ve always had a passion for writing, and something I’ve always done even in my spare time.”

“I’d just think about stories and imagine how they are going to be and then just write.”

HOW HIS ROLE IN ‘SCANDAL!’ AFFECTED HIS STUDIES

The seasoned actor admits that he got a lot of attention on campus because of his popular role in the award-winning soapie.

“There was a lot of “Ke Scelo, ke Scelo, aowa chomy ase yena”, [it is Scelo, ‘no friend it is not him’ it is Scelo] like people would have mini debates amongst each other, whispers and everything.”

“Oh gosh, I wished we had Covid-19 already in 2019 when I started so that I could have worn a mask,” he giggles

This was an interesting transition for him because he never really saw himself as an academic so for him it was interesting to make that decision.

He chose TUT in Pretoria because he’s been in Johannesburg all his life and had been acting in Jo’burg and didn’t want any distractions.

“I remember while I was on Scandal!, I went to Boston Media for two months, and then I was acting ‘eish let me go back’ like acting kept on pulling me back.”

He could never finish, he did a lot of courses here and there, but couldn’t get a proper degree.

ALSO READ:‘Scandal!’ Review: Will Dintle or Dr Nyasha save Hlengiwe from Amo?