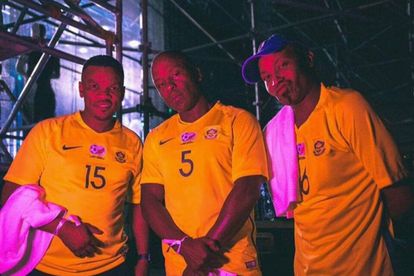 The popular 90s kwaito group brought the house down with their special gig ahead of the Cassper vs Naak fight.

Unfortunately, their performance did not go according to plan and was plagued by severe sound technical issues.

TKZEE PERFORMANCE GETS THE THUMBS DOWN

Despite the excitement at seeing one of SA’s most prolific groups reunite and perform a few of their greatest hits, fans at home were sorely disappointed.

The group – consisting of Tokollo Tshabalala, Kabelo Mabalane, and Zwai Bala – performed hits like The Final Countdown, Dlala Mapantsula, and others inside the ring.

And everyone inside Sun CIty’s Super Bowl was on their feet – including members of Boxing SA. But viewers – who watched the match via Dstv channel 209 or Channel O – voiced their annoyance at the performance being plagued by sound issues.

“TKZee Ama2000 phandle. But they are so offbeat”

“Did they just give TKZee mics that aren’t working?”

“Mr sound engineer. Somebody is getting fired”

Other tweeps shaded the performance for being for “old people”.

“TKZee performing at 11pm? Too bad the only people who witnessed them at their peak are all asleep”

“I don’t know who TKZee were performing for. Because all old people are either dead or sleeping already”

It wasn’t just TKZee’s performance that had viewers irate. Despite being advertised to start at 6pm, the long wait to the match – which started after 23:00 had fans annoyed.