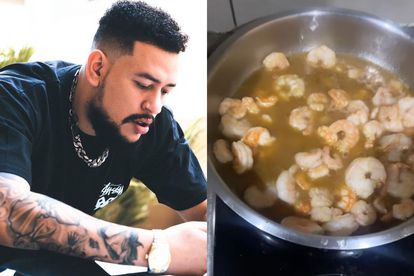 There’s a new chef in town! AKA added Hennessey cognac as a special ingredient for his unique prawn dish. Images via Twitter @ DeeRolaz_ @akaworldwide

There’s a new chef in town! AKA added Hennessey cognac as a special ingredient for his unique prawn dish. Images via Twitter @ DeeRolaz_ @akaworldwide

Former finance minister Tito Mboweni is not the only high-profile person in South Africa getting flack for his unique dinner dishes. Award-winning rapper AKA caught Mzansi’s attention with his out-of-the-box prawn and bok choy dish. Tweeps blasted the Fela in Versace rapper after he added Beef and Onion soup and a few drops of Hennessy cognac to the dish…

TITO MBOWENI OR AKA?

After a sweaty gym session, AKA took to his Instagram stories on Tuesday 14 June and filmed the cooking process for his prawn and bok choy dish.

After adding a stick of butter and prawns to the pan, the 34-year-old rapper added some garlic, garlic and herb butter, beef and opinion soup and water to the dish.

AKA then added his “secret surprise”, some Hennessy to the dish before finishing it off with some spices.

“The amount of butter he started with…The entire packet of soup??? The amount of time the shrimp was in heat??? THE HENNESSY???” questioned another tweep.

“Uncle Tito Mboweni, you have a challenger who goes by the name AKA.”

WHEN HE’S NOT IN THE KITCHEN…

When AKA isn’t cooking up a storm at home, the rapper enjoys a luxurious dining experience at some of Mzansi’s top restaurants.

On 3 June, the rapper wined and dined with legendary Springbok captain Francois Pienaar at five-star restaurant, Pier in Cape Town.